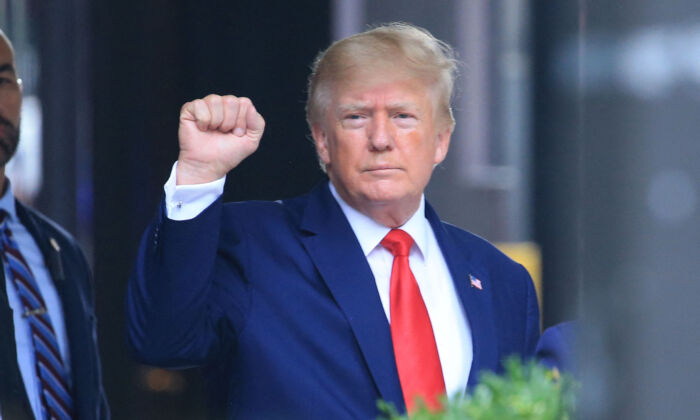 Former President Donald Trump raises his fist while walking to a vehicle outside of Trump Tower in New York on Aug. 10, 2022. (Stringer/AFP via Getty Images)
FBI Raids Trump Resort

A lawyer for former President Donald Trump revealed Thursday that FBI agents refused to speak to her or allow her to view their search of several rooms on his Mar-a-Lago property in Florida.

“They had unfettered access to the property. They looked at god knows what in there and did god knows what in there. We have no idea,” Trump lawyer Lindsey Halligan told Fox News. “What the FBI did was an appalling display of abuse of power. All documents requested were previously handed over. President Trump and his team painstakingly reviewed every single document at Mar-a-Lago and gave the government what they requested.”

“If they needed any other documents, they could have just asked. And the warrant was secured under seal, so they tried to get away with concealing this overreach by obtaining a warrant under seal. Nobody knew about it.”

Providing more details on where the FBI looked, Halligan recalled seeing 30 to 40 agents searching “areas one, two, and three” in Mar-a-Lago. She understood those areas to be Trump’s bedroom, office, and a storage room.

“And other than that, we were not allowed to talk to them or go inside at all,” the lawyer said.

The agents were either wearing suits or were wearing cargo pants, masks, and gloves, she told the outlet. “They refused to talk to me. They refused to let me in,” she said.

The FBI warrant has not yet been unsealed. The Florida judge in the case, Bruce Reinhart, on Wednesday ordered the Justice Department to file a response to two requests to a motion to unseal the warrant

“The response may be filed ex parte and under seal as necessary to avoid disclosing matters already under seal. In that event, the Government shall file a redacted Response in the public record. If it chooses, the Government may file a consolidated Response to all Motions to Seal,” Reinhart wrote in his order, responding to court filings from Judicial Watch and the Albany Times Union to unseal the warrant.

Both the FBI and the Department of Justice have declined to comment or have not responded to requests for comment. Neither agency has issued a public statement about the search, which analysts say was likely authorized by high-level law enforcement officials.

On Monday evening, the former president confirmed on social media that his Florida residence was raided by the FBI. And another one of Trump’s lawyers told news outlets this week that agents would not give her a copy of the warrant and presented it to her from more than 10 feet away.

In Thursday’s interview, Halligan said the agents knew Trump was at his residence in Bedminster, New Jersey, and hasn’t been to Mar-a-Lago in a while.

“They thought they could sneak in, snoop around without attorneys present and in case they walked out with nothing, so nobody would know that they overreached this degree,” she alleged. “It’s unprecedented in United States history. The government seems to be out of control. It’s plagued with manipulation, corruption, greed, and fraud.”

Trump and his family as well as high-profile GOP leaders have suggested the raid is politically motivated and designed to harm Republicans’ chances during the forthcoming 2022 midterm elections. At the same time, however, observers say the unprecedented action may propel Trump to announce his bid for the presidency in 2024.