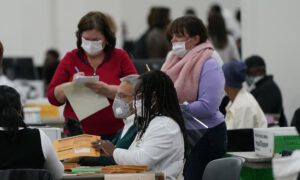 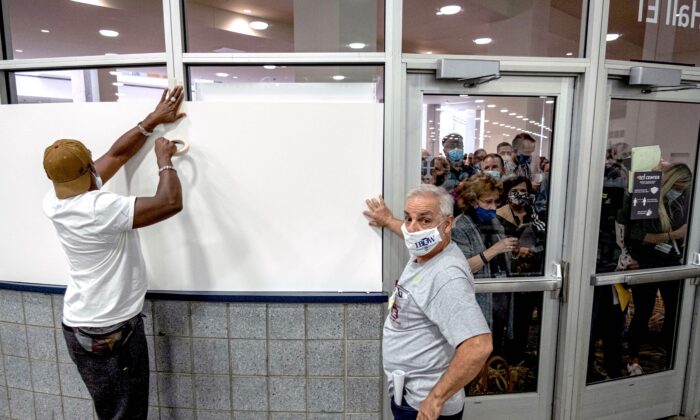 The lawsuit (pdf) is accompanied by 234 pages of sworn witness affidavits that describe how Republican poll challengers were prevented from having adequate access to observe the counting process in violation of Michigan’s election code.

The witnesses detail a battery of problems with the handling, processing, and counting of the votes, including instances in which election officials ignored their challenges.

“Michigan’s election code contains a host of provisions intended to prevent fraudulent ballots from being counted. A fraudulent ballot, if counted, disenfranchises a lawful voter,” the summary of the lawsuit states.

The campaign is asking the court to order the state and county canvassing boards to not certify any election results that contain ballots that were processed when Republican observers were blocked from having adequate access to observe the counting process, as well as any tally that contains unlawfully cast ballots.

The campaign is also pointing to an alleged software tabulation error to request that any ballots processed by the same software be counted by hand.

In a statement, Jake Rollow, the spokesman for the Michigan Department of State, said the lawsuit is “a press release masquerading as a legal claim.”

“This is the same kind of irresponsible false rhetoric and misinformation that we saw throughout the election,” Rollow said. “But it does not change the truth: Michigan’s elections were conducted fairly, securely, transparently, and the results are an accurate reflection of the will of the people.”

David Fink, an attorney for the City of Detroit Mayor’s Office, called the lawsuit’s claim “baseless.”

“This case simply repeats the baseless claims that have been made in four separate lawsuits and that already have been refuted by each court that has ruled so far,” Fink said in a statement.

As a result, there were more Democratic challengers observing the count than Republicans. One witness estimated the ratio at 2 to 1. Another said that at one point, there were 10 Democrats on the counting floor for each Republican.

The election officials allegedly treated Republican observers differently from Democrats, including by enforcing a six-foot distance rule with Republicans while letting Democrats get closer to the tables. At least 19 witnesses said their challenges to the counting process were ignored.

When Christopher Schornak raised a challenge, a poll worker told him, “We are not talking to you, you cannot challenge this.” When Stephanie Krause attempted a challenge, an election official said challenges were no longer being accepted because the “rules ‘no longer applied.’” Mary Shinkle, another challenger, said she could not observe a ballot being duplicated because “if we make a mistake, then you would be all over us.”

“Election officials would applaud, cheer, and yell whenever a Republican challenger was ejected from the counting area,” the lawsuit says.

Seven of the witnesses said they saw the same ballots being run through tabulation machines multiple times. One Republican challenger saw a stack of 27 ballots—with the ballot numbers covered with tape—being run through a tabulator on five separate occasions. Eleven of the witnesses said the duplication of ballots rejected by the automated scanner was done by teams composed of two Democrats instead of being bipartisan.

“When challenger Abbie Helminen raised a challenge that the name on the ballot envelope did not match the name on the voter list, she was told by an election official to ‘get away’ and that the counting table she was observing had ‘a different process than other tables,’” the lawsuit states.

A poll worker told one of the challengers that he or she “was being told to change the date on ballots to reflect that the ballots were received on an earlier date.”

The Trump campaign is looking to have all of the ballots that were tabulated using the Dominion Voting software be recounted by hand to ensure accuracy.

In an allegation disputed by both the software vendor and Michigan Secretary of State Jocelyn Benson, Republican National Committee Chairwoman Ronna McDaniel and other GOP officials said that a glitch in the Dominion software switched 6,000 GOP votes to Democrats. The software was used in 47 Michigan counties.

“Secretary of State Benson released a statement blaming the county clerk for not updating certain ‘media drives,’ but her statement failed to provide any coherent explanation of how the Dominion Voting Systems software and vote tabulators produced such a massive miscount,” the lawsuit states.

Benson said that the error was remedied once it was discovered.

“What Secretary Benson fails to address is what would have happened if no one ‘discover[ed] the error,’ for instance, in Wayne County, where the number of registered voters is much greater than Antrim County, and where the tabulators were not individually tested,” the lawsuit states. The state of Texas rejected Dominion’s voting software after an extensive review.

In the most recent rejection (pdf) in 2019, Texas Deputy Secretary of State Jose Esparza concluded that reports from the examination of the software “raise concerns” about whether the Dominion “system is suitable for its intended purpose, operates efficiently and accurately, and is safe from fraudulent or unauthorized manipulation.”