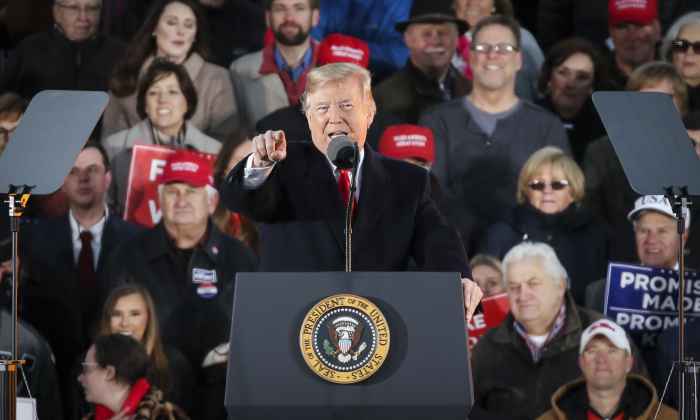 President Donald Trump congratulated one of the largest steelmakers in the United States after the company announced plans to spend $1.7 billion to $1.8 billion to build a steel mill in the Southwest.

Steel Dynamics announced on Nov. 26 that its board of directors approved the construction of a facility that would create 600 well-paying jobs. The plant, once operational, will produce up to 3 million tons of steel products for the energy, automotive, construction, and appliance industries.

“Steel Dynamics announced that it will build a brand new 3 million ton steel mill in the Southwest that will create 600 good-paying U.S. JOBS,” Trump wrote on Twitter on Nov. 28. “Steel JOBS are coming back to America, just like I predicted. Congratulations to Steel Dynamics!”

Steel Dynamics announced that it will build a brand new 3 million ton steel mill in the Southwest that will create 600 good-paying U.S. JOBS. Steel JOBS are coming back to America, just like I predicted. Congratulations to Steel Dynamics!

Steel Dynamics expects to begin construction on the flat roll steel mill in 2020 after choosing a site and acquiring permits. The plant should be operational by the second half of 2021, according to a timeline provided by the company.

“We believe our unique operating culture, coupled with our considerable experience in successfully constructing and operating cost-effective and highly profitable steel mills, positions us well to execute this greenfield opportunity, and to deliver strong long-term value creation,” Mark Millett, the CEO of Steel Dynamics, said in a statement.

Chinese steel imports made up 33 percent of the U.S. steel market in 2017. Most steel makers have reported losses since 2009. Tens of thousands of American workers have lost their jobs and dozens of factories have shuttered since 2000 because of imports, according to the Alliance for American Manufacturing, a nonprofit formed by manufacturers and the United Steelworkers.

Washington has accused Beijing of dumping steel on the U.S. market at rock-bottom prices. The majority of Chinese steelmakers are state-owned and subsidized, producing a massive amount of steel at a loss. The excess Chinese steel used to end up on the U.S. market, hurting domestic suppliers who couldn’t compete with the artificially low prices.

Trump’s praise for the Fort Wayne, Indiana-based company came on the heels of his criticism of General Motors Co., which announced plans on Nov. 26 to cut up to 15,000 jobs and close five North American plants. The president added that the White House is studying plans for a tariff on imported cars to boost domestic production.

“The President has great power on this issue,” the president wrote on Twitter. “Because of the G.M. event, it is being studied now!”