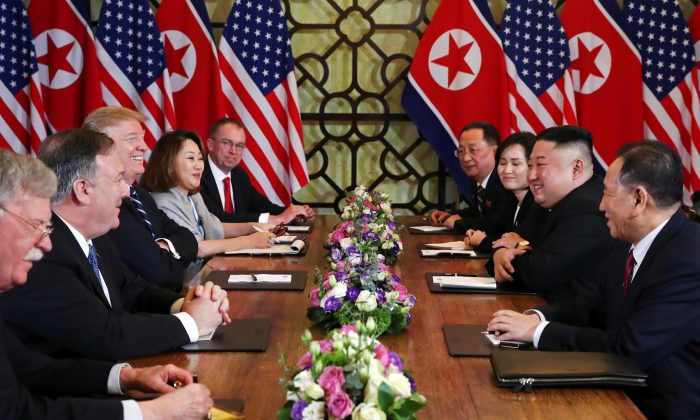 President Donald Trump and North Korea’s leader Kim Jong Un, along with their respective entourages, attend an extended bilateral meeting in the Metropole hotel during the second North Korea-U.S. summit in Hanoi, Vietnam, on Feb. 28, 2019. (Leah Millis/Reuters)
US News

Trump-Kim Summit Ends With No Deal on Denuclearization

President Donald Trump and North Korean leader Kim Jong Un’s second summit has ended ahead of schedule with no agreement on ridding the Korean Peninsula of nuclear weapons.

“The two leaders discussed various ways to advance denuclearization and economic driven concepts,” White House press secretary Sarah Huckabee Sanders said in a statement on Thursday, Feb. 28. “No agreement was reached at this time, but their respective teams look forward to meeting in the future.”

Trump said at a press conference later that North Korea’s insistence on lifting sanctions without offering enough denuclearization in return proved to be the sticking point.

The United States placed punitive sanctions on North Korea when the reclusive state undertook a series of nuclear and ballistic missile tests in 2017, cutting off its main sources of hard cash.

Both Trump and Kim left the venue of their talks, the French-colonial-era Metropole hotel, without attending a planned lunch together.

“Sometimes you have to walk, and this was just one of those times,” Trump said, adding, “It was a friendly walk.”

‘Rather Do It Right’

While the two leaders failed to reach a consensus, Trump said the summit was “very productive.” The president added he had a proposed agreement that was “ready to be signed,” but said he didn’t want to rush into a bad deal.

“I’d much rather do it right than do it fast,” the president said. “We’re in a position to do something very special.”

Trump has long sought to entice Kim into a deal to relinquish North Korea’s nuclear arsenal by highlighting the economic benefits.

“I think it’s going to be an economic powerhouse,” Trump said of North Korea. “And it’s something I very much look forward to helping with.”

Trump and Pompeo have repeatedly promised to help make North Korea prosper if Kim rids his nation of nuclear weapons.

“Vietnam is thriving like few places on earth,” Trump wrote on Twitter before a meeting with Vietnamese leaders. “North Korea would be the same, and very quickly if it would denuclearize. The potential is AWESOME, a great opportunity, like almost none other in history, for my friend Kim Jong Un. We will know fairly soon—Very Interesting!”

At the historic summit in June 2018, Trump became the first U.S. president to meet a leader of North Korea’s communist regime. The two leaders signed a joint statement, with Kim committing to “complete denuclearization,” the establishment of relations with the United States, peace on the Korean Peninsula, and the repatriation of the remains of American soldiers. In exchange, Trump offered Kim security guarantees.

North Korea and South Korea are still technically at war after the 1950–1953 conflict between them ended in a truce. Asked if he would declare a formal end to the Korean War, which North Korea has long called for, Trump said, “We’ll see.”

Ahead of the summit last year, North Korea blew up tunnels at a nuclear test site and destroyed missile-testing facilities. After the summit, Kim stopped all missile and nuclear tests, honored the promise to return the remains of U.S. troops, and demolished frontline guard posts near South Korea.

Trump’s administration forced Kim to the negotiating table by imposing a strict sanctions regime in response to nuclear tests and missile launches. The White House has insisted that the sanctions will remain in place until North Korea achieves “complete, irreversible, and verifiable denuclearization.” Trump recently suggested that he may ease sanctions if Kim does something “meaningful.”

Trump had indicated before the Hanoi summit that there is no rush for North Korea to denuclearize. He reaffirmed that position on Feb. 27 and said, while some people believed the talks should move more quickly, he was satisfied.

When Kim was asked by reporters in Hanoi whether North Korea was ready to denuclearize, he said, “If I’m not willing to do that I won’t be here right now.”

There has long been skepticism about whether Kim would be willing to give up the nuclear weapons his military had spent decades developing and that, according to many North Korea watchers, he felt ensured his regime’s survival.

Lim Soo-ho, senior research fellow at the Institute for National Security Strategy, told Reuters that while the lack of a deal was a surprise, it by no means signifies a breakdown of the entire process.

“No deal today doesn’t mean there won’t be one in coming months,” Soo-ho said, adding that the “stakes were way too high” for this summit to conclude with an aspirational agreement that failed to deliver firm commitments.