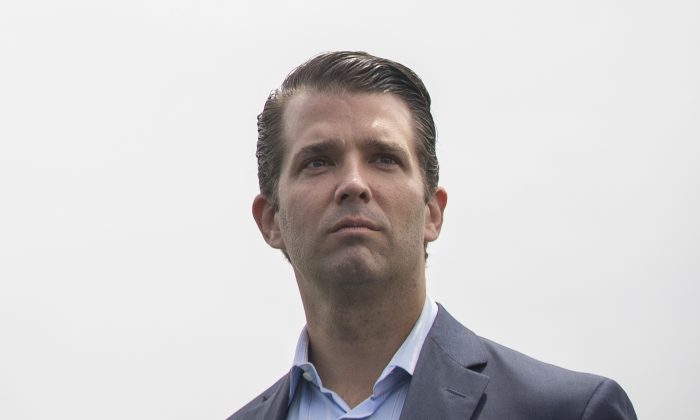 Donald Trump Jr. brought up “Empire” actor Jussie Smollett when speaking about Rep. Adam Schiff (D-Calif.), claiming he is a habitual liar who wasn’t challenged by mainstream news outlets when he read out a parody account of President Donald Trump’s phone call with the Ukrainian president.

The president’s eldest son told Fox News’ Sean Hannity that if he read the same parody before Congress, he would be put in jail.

The congressman, he said, is “basically the Jussie Smollett of Congress on steroids.” Smollet was accused of staging a hoax hate crime to further his own career earlier this year. After Chicago prosecutors dropped charges against him, Smollett has maintained that two men yelled slurs at him and wrapped a noose around his neck. However, many people believe he staged the attack.

He also said that if a Republican chairman read a similar account, media outlets would rip them apart for days on end.

“The American people see it—they get it,” he said, adding that Democrats “haven’t done anything in three years. The reality is this: they hate Trump more than they love America.”

Schiff later said that his summary last week of Trump’s comments was “was meant to be, at least part, in parody.”

On Oct. 2, the New York Times reported that a CIA officer who filed a whistleblower complaint against Trump approached a House Intelligence Committee aide with their concerns about filing the complaint. Schiff is the chair of the committee.

According to the NY Times account, Schiff knew about the would-be whistleblower’s complaint that Trump allegedly abused his power.

But on Wednesday, he and House Speaker Nancy Pelosi (D-Calif.) said Trump “undermined national security” and said it was grounds for impeachment.

It’s hard to imagine a scenario more concerning to our Founders than this:

A president using the power of his office to press a foreign leader for dirt on a political opponent.

But we have a system of checks and balances. And we will hold this President accountable. pic.twitter.com/mPihdEPtUz

“It’s hard to imagine a scenario more concerning to our Founders than this,” Schiff also said. “A president using the power of his office to press a foreign leader for dirt on a political opponent. But we have a system of checks and balances. And we will hold this President accountable.”

Last week, Pelosi announced that the House would be moving on inquiring about impeaching Trump over a July phone call with his Ukrainian counterpart where he asked him to investigate former Vice President Joe Biden and his son, Hunter.