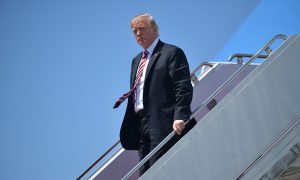 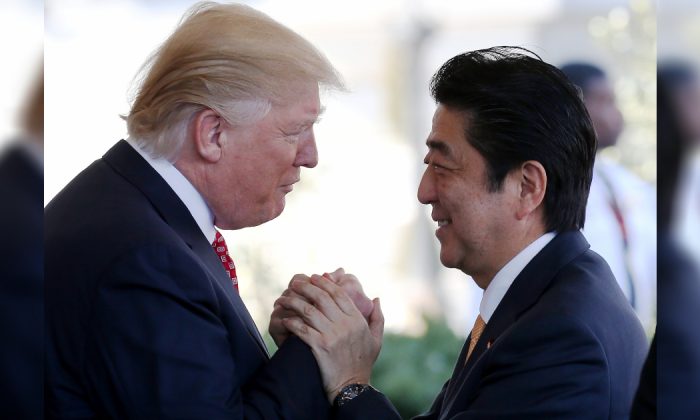 WASHINGTON—Ahead of his second meeting with North Korea’s Kim Jong Un, President Donald Trump said on Feb. 15 that the leader of Japan had nominated him for a Nobel Peace Prize for his work to open up a dialogue with the reclusive country.

Prime Minister Shinzo Abe “gave me the most beautiful copy of a letter that he sent to the people who give out a thing called the Nobel Prize,” Trump told reporters in the Rose Garden when asked about his upcoming summit with Kim later this month in Vietnam.

“He said, ‘I have nominated you, respectfully, on behalf of Japan. I am asking them to give you the Nobel Peace Prize.’”

South Korean President Moon Jae-in, who also has credited Trump with starting negotiations with North Korea, has endorsed him for the Nobel Peace Prize as well.

Trump said early exchanges with Kim were filled with “fire and fury,” but since their first meeting last year in Singapore, the two have established a good relationship. He said Abe nominated him because he was worried about North Korea conducting missile tests over Japan.

In 2009, President Barack Obama received the Nobel Peace Prize for laying out the U.S. commitment to “seek the peace and security of a world without nuclear weapons.”

“I’ll probably never get it, but that’s OK,” Trump said. “They gave it to Obama. He didn’t even know what he got it for.”

A group of 18 House lawmakers signed a letter formally nominating President Donald Trump for the 2019 Nobel Peace Prize for his efforts to bring peace to the Korean Peninsula on May 1, 2018.

“Since taking office, President Trump has worked tirelessly to apply maximum pressure on North Korea to end its illicit weapons programs and bring peace to the region,” said the letter drafted by Rep. Luke Messer and signed by 17 Republican House members.

The formal nomination came on the heels of a statement from South Korean President Moon Jae-in that “Trump should win the Nobel Peace Prize.” Japanese Prime Minister Shinzo Abe and South Korea’s Foreign Minister Kang Kyung-wha had both credited Trump for the breakthrough.

“His Administration successfully united the international community, including China, to impose one of the most successful international sanctions regimes in history,” the letter said. “The sanctions have decimated the North Korean economy and have been largely credited for bringing North Korea to the negotiating table.”

Messer had floated the idea of nominating Trump for the prize since March 2018.

“The only reason the North Korean dictator is coming to the table is because President Trump has stared him down and shown him that we have a leader in America who means business and who has changed the dynamic in major ways,” Messer told Fox News. “That’s why I think he has to be considered for the Nobel Peace Prize.”

When Trump spoke about the breakthrough with North Korea during a rally in Michigan last year on April 28, the crowd began chanting, “Nobel, Nobel, Nobel.”

Trump faced the threat from North Korea head-on early in his presidency while dealing with a battery of high-stakes crises at home and abroad. The communist regime’s dictator, Kim Jong Un, tested several missiles purportedly capable of reaching the United States and detonated what Pyongyang said was a hydrogen bomb.

Trump responded with firm threats of military action and a corresponding relocation of firepower to the Korean peninsula. Simultaneously, the president spearheaded an unprecedented sanctions regime and forged alliances with key players in the region.