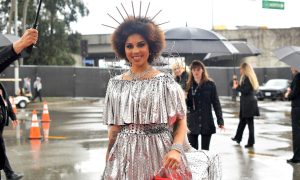 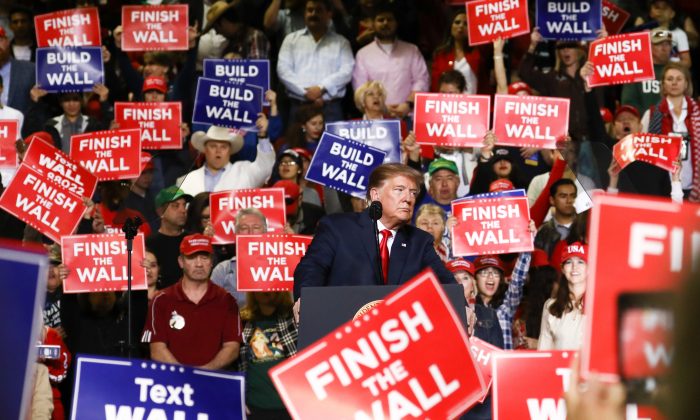 During his El Paso, Texas, rally, President Donald Trump quipped at the expense of the Democrats’ failed Senate candidate in Texas, Beto O’Rourke, whose counter-rally nearby attracted a much smaller crowd.

Trump called O’Rourke “a young man who’s got very little going for himself except he has a great first name”—an apparent shot at O’Rourke’s use of a Hispanic-sounding nickname in the heavily Hispanic area, despite being of Irish lineage.

O’Rourke previously said he’s been called Beto since birth to differentiate him from his grandfather, who was also named Robert.

Organizers of the O’Rourke rally told Politico’s David Siders that they had 7,000 in attendance. Video footage from O’Rourke’s 23-minute speech shows a crowd of perhaps more than 2,000.

“That may be the end of his presidential bid,” Trump said.

O’Rourke has repeatedly suggested that he may enter the 2020 race, though he has yet to formally commit.

Trump received over 70,000 RSVPs for his rally, according to his campaign manager Brad Parscale, who, in a Feb. 11 tweet, estimated Trump’s crowd at 8,000 inside the venue and “tens of thousands in the parking lot and streets” for a total of “over 35,000.”

The Epoch Times couldn’t verify the number of attendees at the Trump rally. The El Paso Police Department didn’t respond to a request for crowd size estimates for the rallies.

Trump’s venue, El Paso County Coliseum, has a capacity of up to 7,000, according to online ticketing sites.

Trump commonly fills venues beyond capacity by using only a small podium for his speaker stand and opening the floor to as many attendees as possible—a practice he followed in El Paso.

Trump went to El Paso, O’Rourke’s hometown, to make a case for building a border barrier. In the first such rally since the November midterm elections, the “Promises Made, Promises Kept” banners had given way to “Finish the Wall.”

Trump highlighted El Paso as an example of the success of border fencing, as the crime rate went down after the fence was erected. Ciudad Juárez, Mexico, is located directly across the border and has massive levels of violence.

O’Rourke, on the other hand, said the city has been “a little less safe” after a border fence was built there in 2008.

Compared to Juárez, which had 1,247 murders in 2018, El Paso was much safer with only 23 murders that year, UPI reported.

But O’Rourke’s reference to the 2008 fence construction misses the fact that El Paso has had some border fencing since the 1990s.

“The El Paso barrier—two parallel chain link fences over 15 feet in height spaced 30 feet apart along the bed of the Rio Grande—helped cut the number of illegal border crossers and curbed crime in the city, residents say,” Reuters reported in March 2008, before the fence was further expanded—against opposition from some locals.

It’s hard to quantify, though, how much of the decrease can be attributed to the fence.

“Along this stretch, the fence in itself doesn’t stop anyone, but it does slow them down and gives us time to react. Those extra seconds are vital, and that’s what a lot of people don’t realize,” border agent Jose Cisneros said in 2008.

O’Rourke voiced his opposition to building a border wall “at a time of record-low northbound apprehensions.”

It’s not clear what he meant. U.S. Customs and Border Protection doesn’t differentiate apprehensions of illegal border crossers by where they’re bound in its public statistics.

In the El Paso sector, which covers the border in the westernmost tip of Texas and the whole stretch in New Mexico, apprehensions reached nearly 35,000 in the first four months of the fiscal 2019, marking an increase of nearly 440 percent compared to the same period the year before and the highest in 13 years (pdf).

As of August 2017, the roughly 180-mile border in New Mexico featured only 14 miles of pedestrian fencing in addition to 101 miles of vehicle fencing, which is only about five feet high and easy to climb over (pdf).

Trump has requested $5.7 million for an additional 234 miles of steel slats border fencing for the 2019 budget. After stiff opposition from leaders of Democrats in Congress, he shut down about a quarter of the federal government until Democrats agreed to negotiate the wall funding after a record-breaking 35 days. The negotiations produced an offer of less than $1.4 billion on Feb. 11. Trump indicated he was unhappy with the number, but wants to avoid another shutdown, which can be averted by passing the remaining appropriations by Feb. 15.