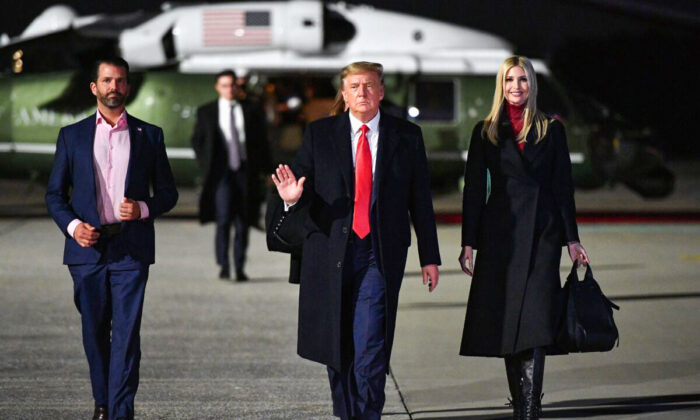 Former President Donald Trump and his two eldest children, Donald Trump Jr.. and Ivanka Trump, have agreed to testify in a New York state civil investigation into the family’s business practices, according to a court document dated June 8.

The three are scheduled to give answers under oath beginning on July 15, but they have until June 13 to appeal to New York state’s highest court for a delay. If the court issues a stay, they won’t have to testify on that date.

According to the document, investigators will need to finish their questioning “by the following week.”

The investigation into the Trumps is headed by New York Attorney General Letitia James, a Democrat, whose office began investigating Trump in 2019. James is looking into whether the Trump Organization misled lenders and tax authorities.

Trump has denied any wrongdoing.

Trump and his two children have argued that testifying in the civil probe would violate their constitutional rights because their words could be used in a related criminal investigation led by Manhattan District Attorney Alvin Bragg.

James first issued subpoenas for the Trumps to testify more than six months ago. In response to the subpoenas, Alina Habba, an attorney for Trump and the Trump Organization, said James “has weaponized her office through this political witch hunt” and her actions “a threat to our democracy.”

Trump tried to appeal James’s effort in court. In May, a panel of judges from the New York Supreme Court ruled that Trump and his two children must testify.

In December last year, Trump sued James, seeking an order for James to cease or limit her office’s investigation. In his lawsuit (pdf), Trump alleged that James was using the investigation to further her political career, and the probe was a “thinly-veiled effort to publicly malign Trump and his associates.”

“Her mission is guided solely by political animus and a desire to harass, intimidate, and retaliate against a private citizen who she views as a political opponent,” according to the lawsuit.

Trump’s lawsuit was dismissed by U.S. District Judge Brenda Sannes in late May, saying in her ruling (pdf) that there was “no evidence” that James’s investigation was conducted in bad faith.

Separately, New York state Judge Arthur Engoron ruled in a virtual hearing on June 8 that Trump must send James affidavits from several Trump Organization executives about their policies for retaining or destroying records.

Engoron also said he would not yet fully purge a contempt order he issued against Trump.

In April, Engoron found Trump in contempt for not responding to a subpoena issued by James. The judge then ordered the former president to pay a fine of $10,000 per day.

Trump has paid $110,000 as one of the conditions needed to have the contempt order lifted.

Weisselberg’s trial is expected to begin this year.