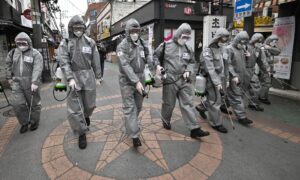 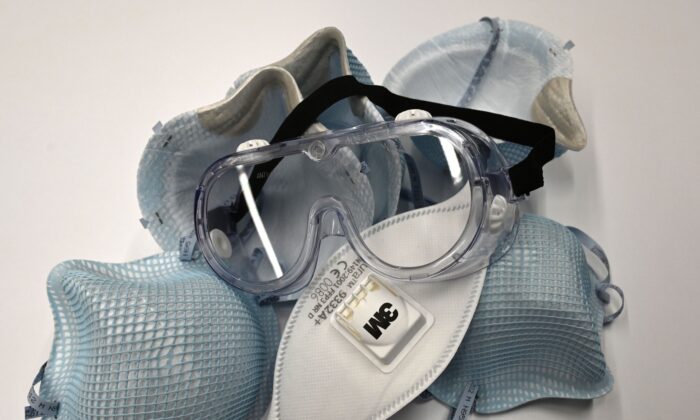 Protective N95 masks lie on a table at an office in Washington on Feb. 26, 2020. (Eva Hambach/AFP/Getty Images)
AMERICA

The Trump administration said it has invoked the Defense Production Act (DPA) with respect to multiple companies to step up production of equipment amid the COVID-19 supply crunch.

The separate DPA actions relate to ventilators and masks.

“Today, I have issued an order under the Defense Production Act to more fully ensure that domestic manufacturers can produce ventilators needed to save American lives,” Trump wrote in a statement issued by the White House on April 2.

The president said the order would save lives “by removing obstacles in the supply chain that threaten the rapid production of ventilators,” key devices in the fight against the Chinese Communist Party (CCP) virus as they help keep seriously ill patients alive by delivering oxygen to the lungs.

Trump specified a number of domestic manufacturers, including General Electric, Hill-Rom, Medtronic, ResMed, Royal Philips, and Vyaire Medical, adding that the order would help companies obtain the supplies they need to build ventilators.

“I am grateful to these and other domestic manufacturers for ramping up their production of ventilators during this difficult time,” the president said in the statement, adding the devices were needed “to defeat the virus.”

Separately, the president singled out 3M in an April 2 memorandum ordering the Secretary of Homeland Security to “use any and all authority available under the Act to acquire, from any appropriate subsidiary or affiliate of 3M Company, the number of N95 respirators that the Administrator determines to be appropriate.”

American companies, including 3M, have stepped up production to around 50 million masks per month in the United States, far short of the estimated 300 million per month needed to fight the outbreak, according to The Wall Street Journal.

At a White House briefing on the CCP virus pandemic earlier on Thursday, Trump announced he had signed a DPA order for 3M to produce face masks. “Hopefully they’ll be able to do what they are supposed to do,” he said.

Later in the day, Trump wrote a tweet saying, “We hit 3M hard today after seeing what they were doing with their masks,” in an apparent reference to reports that 3M had been exporting many of its masks to other countries instead of reserving them for domestic use.

“P Act. all the way,” Trump continued, with P apparently referring to the Defense Production Act. “Big surprise to many in government as to what they were doing—will have a big price to pay!”

White House trade adviser Peter Navarro said at the briefing, “We’ve had some issues making sure that all of the production that 3M does around the world, enough of it is coming back here to the right places.”

In a segment of his show on Fox News, Tucker Carlson spoke to Jared Moskowitz from the Florida Division of Emergency Management about efforts to obtain 3M masks.

“Since when do we have a U.S. company that sells masks, and I try to offer them money, and they won’t sell them to me? That I have to go through their authorized distributors, and their only excuse is that they don’t have a perfect system,” Moskowitz complained on the show.

Moskowitz said 3M distributors told him procurers from abroad were buying up masks ahead of U.S. states.

Following the announcement of the DPA order, 3M said in a statement on Friday it would work closely with the Federal Emergency Management Agency to increase the production of respirators.

“We appreciate the authorities in the DPA that provide a framework for us to expand even further the work we are doing in response to the global pandemic crisis,” the company stated.

“The administration also requested that 3M cease exporting respirators that we currently manufacture in the United States to the Canadian and Latin American markets,” the company continued.

“That is the opposite of what we and the administration, on behalf of the American people, both seek,” 3M stated.