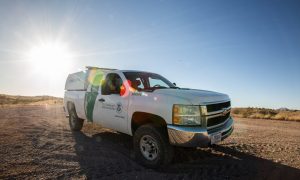 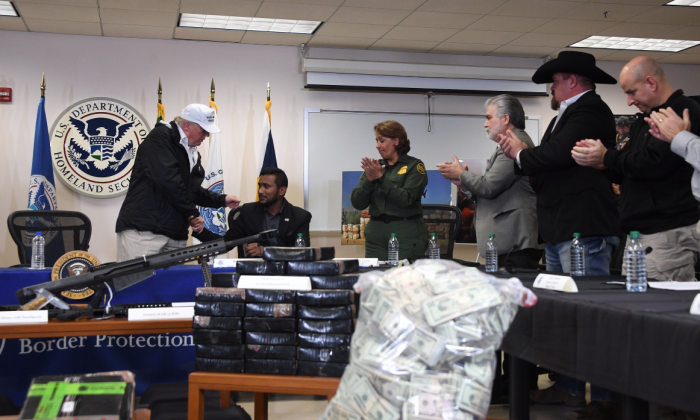 President Donald Trump speaks with Reggie Singh, after he spoke about the death of his brother from an illegal immigrant, during his visit to the local Border Patrol station in McAllen, Texas, on Jan. 10, 2019. (JIM WATSON/AFP/Getty Images)
Trump Administration

Reggie Singh, who sat to the president’s left, said he doesn’t want any other family to go through what his family is enduring.

Ronil was fatally shot over Christmas during a traffic stop; the accused killer is an illegal alien who has two prior DUI arrests, but had not been referred to immigration authorities.

“The way he was killed—what my family is going through right now—I don’t want any other family, law enforcement, to go through that,” Singh said. The Singh’s are legal immigrants from the Fiji Islands.

“I had to pick up his remains. No one should ever, ever have to go through that on Christmas Day,” Singh said.

Singh said he supports what the president is doing to secure the border, “anything to minimize and stop” the illegal aliens and activity coming into the country.

After speaking, Singh received a standing ovation from roundtable participants and a hug from Trump.

Marie Vega was also at the roundtable. She was with her family during a casual afternoon of fishing when her son was fatally shot by an illegal alien. Her son, Border Patrol agent Javier Vega, Jr, was shot when he tried to stop an illegal alien from stealing the family’s vehicle.

“Never in my wildest dream did I ever imagine my son dying on a family outing,” Vega said. “We had a criminal illegal alien that killed him. He came thinking he was entitled to one of the two vehicles that we had there.”

“No family should suffer the loss of a child. A parent should not have to bury their child,” she said. “We need the wall—but not just the wall. There’s other things we need to do also.”

Trump assured Vega and Singh that he will work to make sure their loved ones will not have died in vain. “Nobody talks about how unfair it is to the victims of these brutal killings,” Trump said. “And by the way, over the years, there’s thousands of them.

“My most sacred duty as president is to defend the people of this nation.”

In fiscal year 2018, almost 400,000 people were apprehended by Border Patrol for illegally crossing the U.S.–Mexico border.

Over the past two years, Trump said Immigration and Customs Enforcement agents arrested 4,000 illegal aliens for homicide; 30,000 for sex crimes; and 100,000 for assault.

Trump is considering declaring a national emergency to secure funding for a wall.

“I’m not prepared to do that yet. But if I have to, I will,” he said before departing to Texas on Jan. 10. “This is a crisis. You have human trafficking. You have drugs. You have criminals coming in. You have gangs, MS-13.”

Before leaving the White House en route to the U.S.–Mexico border in Texas, President Donald Trump spoke to media about border security.

“You know who has more human pain? The parents of people who had children killed by an illegal immigrant that should have never been in the country,” he said.

“You know who has more human pain? The husband that lost a wife, or the wife that lost the husband to an illegal immigrant that came in five or six times, that shouldn’t be here. That’s the human pain.”