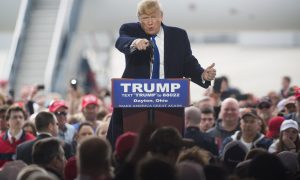 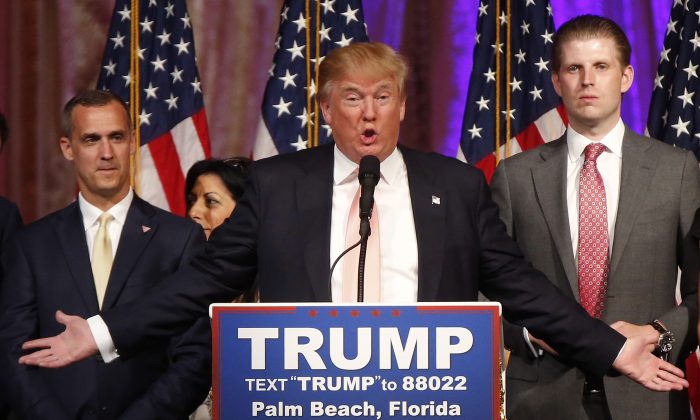 Trump Intermingling Business With Politics as He Campaigns

WEST PALM BEACH, Florida—Republican presidential front-runner Donald Trump appeared to be wrapping up a victory speech at his sprawling Mar-a-Lago club earlier this week when he turned to the negative ads flooding the airwaves against him.

Trump recalled being at a professional golf tournament held at his Miami golf course recently. Everything was going smoothly, he said, until one of the ads started playing on TV as he schmoozed with tournament sponsors.

“I’m with these wonderful people from Cadillac and all these top executives, and I’m saying, ‘Look over there! Look! Don’t watch it! No, you don’t want to watch it!’ ” Trump said, re-enacting how he tried to distract them. “I’m saying, ‘Isn’t the grass beautiful? Look, look. Don’t watch!’ “

It was a rare light moment in an often-heated campaign that offered a glimpse into the way the billionaire businessman’s campaign has transformed his day-to-day life. But it also underscored something deeper: As he crisscrosses the country delivering speeches at rallies and calling into cable news shows, Trump’s business ventures are never far from his mind and have been playing an increasingly prominent role in his campaign.

In recent weeks, Trump has held election night parties at three of his Florida properties: golf clubs in Jupiter and West Palm Beach, Florida, and twice at his sprawling Mar-a-Lago club nearby. Each evening, members of Trump’s clubs have been invited to observe the festivities, followed or preceded by lavish dinners or cocktail parties. Reporters have also been invited to transmit images of Trump’s particular brand of opulence to the world.

From the beginning of his campaign, Trump has pointed to his business success as his fundamental qualification for the job of president. He likes to say his “whole life” has been about making money, and now he wants to make money for the United States. He often references his assets and projects — from the skating rink in Manhattan’s Central Park, which he rebuilt, to his many skyscrapers — as evidence of what distinguishes him from what he describes as the “all talk, no action politicians.”

Trump’s financial disclosure form released in July listed nearly 500 business entities owned at least partially by Trump, according to the campaign, as well as income from a web of sources ranging from royalties from his books to stocks and speaking fees.

But Trump often sounds like he’s promoting products he profits from, such as the WGC-Cadillac Championship. Of particular pride in recent months has been his transformation of Washington, D.C.’s Old Post Office Pavilion into a hotel.

Trump’s business ventures have also left him open to attack from his rivals. Lawsuits filed against Trump’s now-defunct “Trump University” business course program by former students accusing him of fraud, for instance, have been featured in attacks ads and the issue has been raised on the debate stage. And Trump, who is synonymous with his brand, has been fighting back, at one point having staff set up displays of various Trump-branded products at a recent event to try to prove that the products were still in existence. (The steak on display in fact came from a local distributor.)

Trump’s campaign did not respond to questions about how much time the businessman-turned-politician has spent juggling his business projects while on the campaign trail. He’s said in the past that his children and trusted executives have been taking on more and more responsibility for daily management and that he expects to turn his whole portfolio over to his children if he’s elected president.

Related Coverage
Marco Rubio: I Look Forward to Life as a ‘Private Citizen’

But Trump has been known to pop by that Post Office hotel during trips to Washington, including taking a lengthy tour of the grounds after speaking at a Republican Jewish Coalition event in December.

And while members of Trump’s country clubs say they’ve seen less of the billionaire businessman as he’s ramped up his campaigning, Eric Kaplan, a doctor from Palm Beach Gardens and member of Trump’s golf club in Jupiter, recalled one recent visit.

“He came down to Florida because we at our club wanted new grass,” said Kaplan, explaining that the replacement came with a $450,000 price tag.

“In between his campaign, he walks the grass. He says, ‘You know what? Do it!'” Kaplan said, recalling Trump’s quick decision.

“I mean that’s an amazing work ethic,” Kaplan added. “He wants his stuff to be the best.”

There’s no legal prohibition against a candidate spending his own money or talking about his business ventures while campaigning, said Paul S. Ryan of the Campaign Legal Center. But Ryan said it’s nonetheless unusual to have a candidate for federal office not only speak so frequently about his businesses but also own such a large number of diverse companies.

2012 GOP nominee Mitt Romney, for instance, spent relatively little time talking about how he’d made his fortune at Bain Capital, as did 2004 Democratic nominee John Kerry.

“We just haven’t really seen it before,” Ryan said.