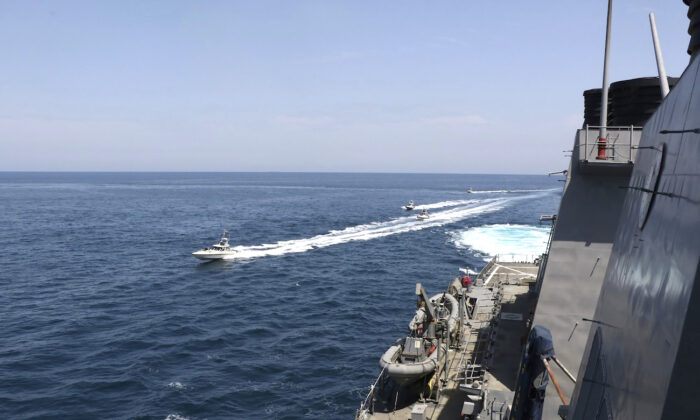 President Donald Trump said he has instructed the Navy to destroy Iranian gunboats if they harass U.S. ships.

The warning follows an incident last week during which 11 Iranian boats were filmed buzzing six U.S. Navy ships in the Persian Gulf, coming as close as 10 yards in an hour-long encounter.

“I have instructed the United States Navy to shoot down and destroy any and all Iranian gunboats if they harass our ships at sea,” Trump wrote on Twitter on April 22, adding no further details.

According to the Navy statement, the Iranian navy ships were “repeatedly crossing their bows and sterns while they were conducting integration operations with U.S. Army Apache attack helicopters to support maritime security outside of Iran’s territorial waters.”

“The IRGCN vessels repeatedly crossed the bows and sterns of the U.S. vessels at extremely close range and high speeds, including multiple crossings of the Puller with a 50 yard closest point of approach (CPA) and within 10 yards of Maui’s bow.”

The U.S. Navy said the “dangerous and provocative actions” from the IRGCN increased the risk of miscalculation and collision and “were not in accordance with the internationally recognized Convention on the International Regulations for Preventing Collisions at Sea [pdf].”

Iran later acknowledged the incident, but blamed the U.S. ships, saying its forces were conducting a drill and faced “the unprofessional and provocative actions of the United States and their indifference to warnings.” It offered no evidence for this explanation.

The incident comes amid heightened military tensions between the United States and Iran following the killing of Iran’s top general by a U.S. airstrike earlier this year.

Iran has continued to try to develop its missile and space programs, despite being restrained by international sanctions and arms restrictions.

Unable to buy the latest military technology from around the world, it primarily relies on proxies, “hybrid warfare,” naval power, and missile defense, according to an unclassified Pentagon report published in November 2019.

The Pentagon monitors Iran’s missile- and rocket-development programs, as the technology could be adapted to carry nuclear warheads.

Iran claimed on April 21 to have added to its array of long-range missiles—already one of the most powerful in the region, according to the Defense Intelligence Agency—with a new design of anti-ship missiles with a 430-mile range.

After several failed attempts in recent months, Iran’s Revolutionary Guards on April 22 also claimed they had successfully launched a satellite into an orbit 264 miles above the Earth’s surface.

That launch has yet to be corroborated by U.S. officials.

Iran’s space program is of particular concern to the United States, as the technology needed to hoist a satellite into space could potentially be converted for use in long-range ballistic missiles.

The United States takes the position that such satellite launches are also in defiance of a U.N. Security Council resolution that restricts Iran’s development of ballistic missiles capable of delivering nuclear weapons.

The developments come as one of the United States’ 11 aircraft carriers is benched in Guam after an outbreak of COVID-19 aboard.

However, U.S. military leaders have warned adversaries not to test U.S. military strength and resolve during the COVID-19 pandemic saying that the virus-hit USS Theodore Roosevelt could be quickly put to sea if needed, and that readiness overall remains high.