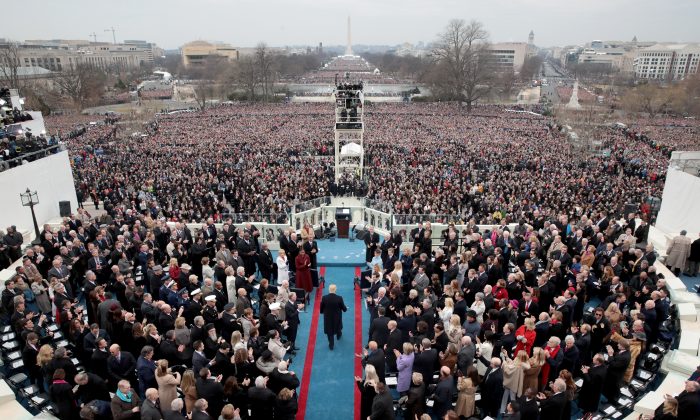 While President Donald Trump’s inauguration TV viewership was lower than former President Barack Obama’s 2009 inauguration, it’s a possibility that the ceremony and speech were seen by more viewers than any president in history due to live streaming.

But live viewers, namely on Facebook and YouTube, may have pushed Trump to the front. CNN noted that 16.9 million watched via live streams, EW.com reported. It’s unclear how many watched Trump via other platforms.

Over the weekend, Trump touted his TV ratings on Twitter. “Wow, television ratings just out: 31 million people watched the Inauguration, 11 million more than the very good ratings from 4 years ago!” he wrote Sunday.

Wow, television ratings just out: 31 million people watched the Inauguration, 11 million more than the very good ratings from 4 years ago!

“Honestly it looked like a million and half people, whatever it was it was. But it went all the way back to the Washington Monument … and by mistake I get this network and it showed an empty field, and it said we drew 250,000 people. Now that’s not bad, but it’s a lie,” he said at the CIA headquarters on Saturday, The Hill reported.

According to the Hollywood Reporter, the 2001 inauguration of George W. Bush averaged around 29 million viewers, while the first term of Bill Clinton’s presidency in 1993 averaged 29.7 million viewers.

The website reported: “It also should be remembered that Trump was not the only object of coverage on Friday. Adjacent protests, a ramp-up to Saturday’s Women’s March on Washington, were frequently showcased during the traditional Inauguration Day pomp and circumstance.”