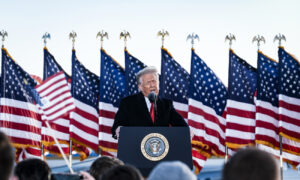 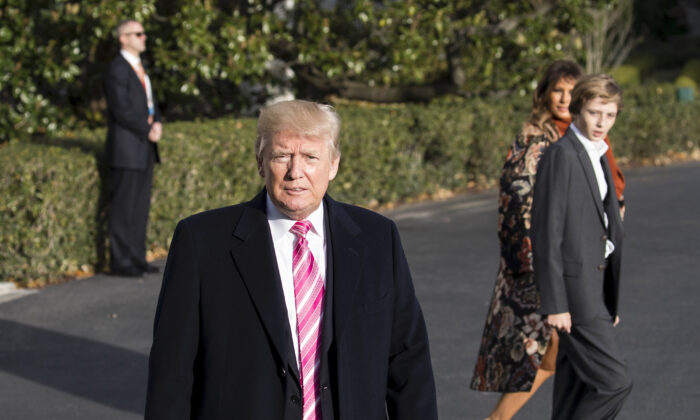 Then-President Donald Trump talks to reporters before departing with his family from the White House to his Mar-a-Lago resort in Florida for the Thanksgiving holiday, in Washington on Nov. 21, 2017. (Samira Bouaou/The Epoch Times)
Impeachment Trial

An attorney for former President Donald Trump said he won’t bring up claims about election fraud while defending the former president during the upcoming impeachment trial.

“There are plenty of questions about how the election was conducted throughout the country, but that’s for a different forum, and I don’t believe that’s important to litigate in the Senate trial because you don’t need it,” attorney Bruce Castor told KYW Newsradio Philadelphia. “President Trump has plenty to win with what he has.”

Castor also pushed back against reports that Trump parted ways with his initial legal team about whether they would advance his claims about election fraud.

“I don’t know where people got that notion that was some sort of litmus test to get to defend the president, because as you saw from the document I filed, which had to be approved by the president personally, there isn’t anything in there about the election being stolen,” Castor said.

Castor and fellow Trump lawyer David Schoen filed a response to House Democratic impeachment managers on Feb. 2, arguing that the impeachment trial is unconstitutional because Trump doesn’t currently hold office. They also argued that Trump has a First Amendment right to express his views about the accuracy of the election results.

Democrats argued that Trump’s speech wasn’t constitutionally protected and said it incited an insurrection at the Capitol on Jan. 6.

“Just because somebody gave a speech and people got excited, it doesn’t mean it’s the speechmaker’s fault—it’s the people who got excited and did what they know is wrong,” Castor said in pushing back against Democrats, referring to Trump’s remarks to a crowd on Jan. 6.

In the interview, he avoided detailing his arguments but stressed that Trump has plenty of precedents to side with.

“There are statutes that deal with incitement to riot, and it’s not even close that the president engaged in what would be considered criminal conduct,” he said, according to Radio.com. “Then there’s a test called the Brandenburg test set down by the Supreme Court. I analyzed that at length, and that isn’t even close to met. I don’t believe there’s a chance in the world they’re going to be able to demonstrate he committed those crimes, or even anything approaching them.

“The president deplores the violence at the Capitol, and those people should be punished, aggressively, as I would have done as if I was the DA and they did it at the Montgomery County courthouse. But just because somebody gave a speech and people got excited, it doesn’t mean it’s the speechmaker’s fault. It’s the people who got excited and did what they know is wrong.”

Based on a vote last week—in which 45 Republican senators rejected holding an impeachment trial outright—it appears unlikely that Trump will be convicted. Many Republican senators agreed that it would be unconstitutional to convict a former president who doesn’t hold office.

At least 17 Republican senators would have to join Democrats to convict a president in a Senate trial.

Democrats, meanwhile, argued in their Feb. 2 brief that Trump deserves a conviction because he shouldn’t be able to hold office in the future.

Trump’s impeachment trial is scheduled to begin the week of Feb. 8.