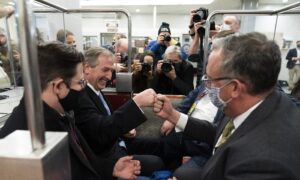 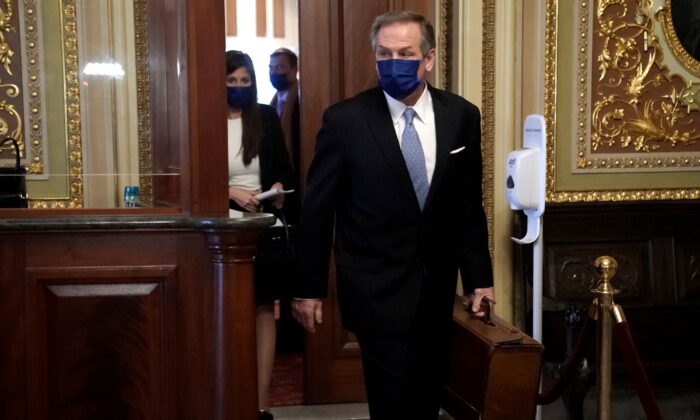 One of former President Donald Trump’s impeachment lawyers accused media companies of trying to push a narrative instead of sticking to the facts, saying news outlets are “trying to divide this country.”

“What this country wants and this country needs is this country to come together,” Michael T. van der Veen said, adding that the reason why there is so much divisiveness is “because of the media.”

“The media wants to tell their narrative rather than just telling it like it is,” he said, adding that corporate media outlets have “to start telling the right story in this country” and that the “media is trying to divide this country” to make a profit.

“You are bloodthirsty for ratings. You’re asking questions that are already set up with a fact-pattern,” van der Veen said.

“When I watch the news, I watch one station, and it is raining. And I watch another station at the same time, and it is sunny. Your coverage is so slanted, it’s got to stop. You guys have to stop and start reporting more like PBS does rather than a TV news show that does not have any journalistic integrity at all. What I’m telling you is they doctored evidence,” he said, referring to managers at the Senate impeachment trial of Trump.

He was responding to a comment and question from a CBS News reporter, Lana Zak, after the Senate acquitted Trump. She was asking him about what he described was doctored evidence that was presented by Democratic House managers during the trial, including the addition of a Twitter checkmark on a tweet and selectively edited videos of the Capitol riots.

The reporter, in her question, framed her question in a way that van der Veen suggested was an attempt to downplay the apparently doctored evidence.

“It’s not OK to doctor a little bit of evidence,” he said.

“Prosecutors in this case doctored evidence. They did not investigate this case, and when they had to come to the court of the Senate to put their case on, because they had not done any investigation, they doctored evidence. It was absolutely shocking. I think when we discovered it and were able to expose it and put it out, I think it turned a lot of senators,” van der Veen said.

Zak had interjected, “To be clear for our viewers, what you’re talking about now is a check mark, a verification on Twitter that did not exist on that particular tweet, 2020 that should have actually read 2021, and the selective editing, you say, of the tapes.”

According to a poll from Gallup last fall, only 9 percent of Americans trust mass media “a great deal” and 31 percent trust the media “a fair amount.” Meanwhile, 33 percent have no trust “at all” in the media, while 27 percent have “not very much trust” in the media, a poll says.