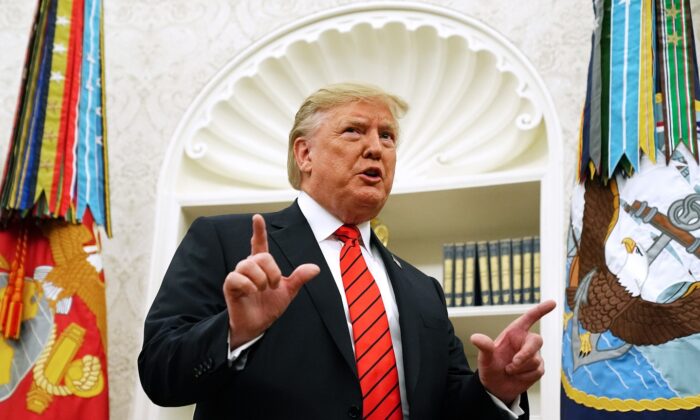 President Donald Trump pauses to answer a reporter’s question about a whistleblower at the White House in Washington on Sept. 30, 2019. (Chip Somodevilla/Getty Images)
Politics

Trump Responds to Pelosi During Her Press Briefing, Accuses Her of Being Disingenuous

President Donald Trump immediately responded to House Speaker Nancy Pelosi (D-Calif.) during her weekly news briefing, accusing her of being disingenuous, when she said the House was making progress on the chamber’s legislative agenda while pursuing impeachment.

Pelosi began the Oct. 2 press conference speaking about progress made to the H.R. 3 bill aimed at lowering the cost of prescription drugs and that they were “on a path” to approving the trilateral trade agreement between the United States, Mexico, and Canada, known as the USMCA. She added that the House was also looking at infrastructure and clean government.

“As we are gathered here today, we are clearly at a place where we are legislating to try to meet the needs of the American people in a transformative way. We are investigating, we are litigating,” Pelosi said during the conference alongside House Intelligence Committee Chairman Adam Schiff (D-Calif.).

Trump, who appeared to be watching the briefing, replied to Pelosi’s speech during the conference, accusing the House Speaker of being “incapable” of working on their legislative agenda.

“Nancy Pelosi just said that she is interested in lowering prescription drug prices & working on the desperately needed USMCA,” Trump wrote on Twitter. “She is incapable of working on either. It is just camouflage for trying to win an election through impeachment. The Do Nothing Democrats are stuck in mud!”

Nancy Pelosi just said that she is interested in lowering prescription drug prices & working on the desperately needed USMCA. She is incapable of working on either. It is just camouflage for trying to win an election through impeachment. The Do Nothing Democrats are stuck in mud!

In a separate post after the briefing, Trump slammed the House Democrats for spending time on the impeachment inquiry instead of focusing on “building up” the country.

“The Do Nothing Democrats should be focused on building up our Country, not wasting everyone’s time and energy on [expletive], which is what they have been doing ever since I got overwhelmingly elected in 2016, 223-306. Get a better candidate this time, you’ll need it!” Trump wrote.

The Do Nothing Democrats should be focused on building up our Country, not wasting everyone’s time and energy on BULLSHIT, which is what they have been doing ever since I got overwhelmingly elected in 2016, 223-306. Get a better candidate this time, you’ll need it!

This comes after Trump and other lawmakers criticized the Democrats for neglecting their role as lawmakers, saying that the impeachment inquiry would affect the House’s legislative processes.

Rep. Jeff Van Drew (D-N.J.) told Fox News in an appearance on Sept. 28 that compared to the last session, he feels that fewer bills are being passed now and Congress “seldom” come together to get things done.

“I think probably only a third of the number of bills compared to [the] last session,” he said.

On Sept. 25, at the United Nations, Trump told reporters that he tried talking to Pelosi about gun laws but said she didn’t appear interested.

“She’s lost her way. She’s been taken over by the radical left. She may be a radical left herself, but she really has lost her way. I spoke to her about guns yesterday. She didn’t even know what I was talking about. She’s not interested in guns,” Trump said.

Pelosi also provided an update on the impeachment inquiry, saying that no one was “joyful” about the inquiry and that it was a “sad time” for Americans.

The House speaker launched the inquiry last week based on recent media reports on Trump’s call with Ukrainian President Volodymyr Zelensky in July, about which an alleged whistleblower filed a complaint against the president claiming that Trump pressured Zelensky to look into 2020 candidate Joe Biden’s activities in Ukraine when he was vice president. The transcript of the call and the complaint was released to the public last week.

Trump had asked Zelensky to look into Crowdstrike, a technology firm that was hired by the Democratic National Committee, to probe what happened to its computer network after an alleged hack, and brought up how Biden admittedly pressured then-Ukrainian President Petro Poroshenko in 2016 to oust a prosecutor in charge of the probe into Ukrainian energy company Burisma.