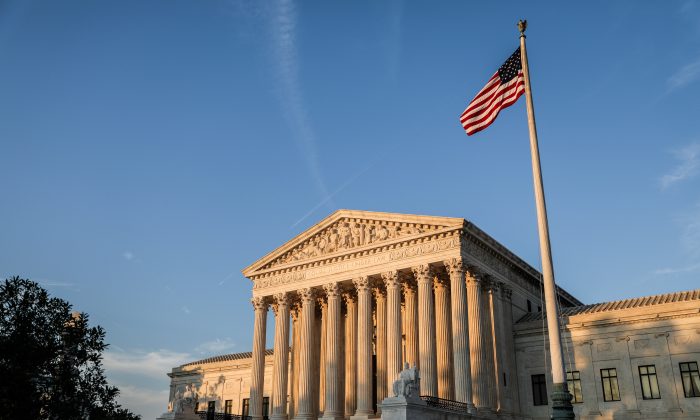 WASHINGTON—President Donald Trump said on Oct. 29 that he plans to remove birthright citizenship via an executive order, setting up another contentious court battle.

Birthright citizenship is the practice of granting full citizenship to anyone born in the United States, including those born to parents who are in the country illegally, on a temporary visa, or as tourists. It is blamed for being a magnet for “birth tourism,” and for igniting chain migration through “anchor babies.”

Between 200,000 and 300,000 babies are born to illegal aliens and non-residents every year, equaling about 7 percent of all births in the United States, according to Pew Research Center estimates using Census Bureau data.

“We’re the only country in the world where a person comes in and has a baby, and the baby is essentially a citizen of the United States … with all of those benefits,” the president told Axios. “It’s ridiculous. It’s ridiculous. And it has to end.”

There is controversy about whether birthright citizenship is guaranteed under the 14th Amendment, which states, in part, “All persons born or naturalized in the United States, and subject to the jurisdiction thereof, are citizens of the United States and of the state wherein they reside.”

Trump said he had always been told he’d need a constitutional amendment to make the change. “Guess what? You don’t,” he said.

The sticking point is the “subject to the jurisdiction thereof” portion of the 14th Amendment, which was first interpreted by the Supreme Court in the 1873 slaughterhouse cases, relating to citizenship of African-Americans, but has never been interpreted regarding illegal aliens.

The majority opinion in 1873 said, “The phrase, ‘subject to its jurisdiction’ was intended to exclude from its operation children of ministers, consuls, and citizens or subjects of foreign States born within the United States.”

But, the ACLU, quick to respond to Trump’s proposal, said eliminating birthright citizenship would breach the Constitution.

“The president cannot erase the Constitution with an executive order, and the 14th Amendment’s citizenship guarantee is clear,” Omar Jadwat, director of the ACLU’s Immigrants’ Rights Project, said in an Oct. 30 statement. “This is a transparent and blatantly unconstitutional attempt to sow division and fan the flames of anti-immigrant hatred in the days ahead of the midterms.”

Jessica Vaughan, policy director at Center for Immigration Studies, said the issue isn’t so clear-cut, and she welcomes Trump’s executive order to kick off a debate.

“Birthright citizenship has long been treated as a sacred cow, when, in fact, there are legitimate legal questions about how we have interpreted it in many different scenarios,” she said.

“It’s an issue that many people have recognized as a problem for a long time, but nobody could agree on how best to approach it. It’s important that President Trump took this step to force a public discussion—and, hopefully, lead to greater clarity.”

Vaughan said the likely pathway to resolution will be through the courts, ending at the Supreme Court. She said Trump likely chose his timing to follow the confirmation of Supreme Court Justice Brett Kavanaugh.

“Having Kavanaugh in place certainly helps the stars get aligned in a way that most people believe would be a resolution of this more to the president’s liking,” she said.

Vaughan said birthright citizenship is a “huge incentive” for illegal immigration and is a drain on taxpayers. Families living illegally in the United States, but that have a U.S.-born child, can be eligible for programs such as Medicaid, public housing benefits, food stamps, and other welfare programs—which indirectly benefit the whole family.

“And, of course, there’s the other, crazy birth tourism industry, where people come from abroad simply to have a baby here and be able to leave with a U.S. passport for that baby,” Vaughan said. “A lot of people see that as diluting U.S. citizenship. Most Americans feel that there should be some connection that citizens have to their country—it’s not just a matter of having a convenient travel document.”

A labor and delivery nurse in a small Central Ohio practice told The Epoch Times last year that she deals with the “anchor baby” issue at least every month, especially with Africans and Asians.

“Because what’s going to happen when they’re 18? He’s going to come over here and be the minority and get an education and get anything he wants.”

The nurse also noted issues with medical bill payment, which she said often falls back to taxpayers, once the mother gives birth and the family returns to their home country.

“This is no longer going to be a theoretical debate, or a topic for dissertations—this is going to be a real policy debate and legal debate, that will be decided on in some way,” she said. “It may not be entirely satisfying or even complete, but we’ll be further along.”

Only 30 of the world’s 195 countries give universal birthright citizenship, with the United States and Canada being the only two developed economies that offer it. Many nations in the past several decades have moved away from giving citizenship to everyone born within their borders, including the UK, Australia, New Zealand, India, and Ireland.

John Eastman, a constitutional scholar and director of Chapman University’s Center for Constitutional Jurisprudence, told Axios that it wasn’t until the 1960s that citizenship was conferred upon children born in the United States to non-residents or illegal aliens.

Eastman told The Epoch Times that the change was not precipitated by an executive order, congressional action, or court decision.

“Near as I have been able to determine, a bureaucrat changed the form in the passport office to exclude questions about a child’s parental status at his birth,” he said in an email. “That had previously been a key part of the passport application, which required proof of citizenship.”

Sen. Lindsey Graham (R-S.C.) wrote on Twitter that he plans to introduce legislation “along the same lines” as Trump’s proposed executive order.

Graham said the policy is a “magnet for illegal immigration out of the mainstream of the developed world, and needs to come to an end.”

At the time, Reid said on the Senate floor: “If making it easy to be an illegal alien isn’t enough, how about offering a reward for being an illegal immigrant? No sane country would do that, right?

“Guess again. If you break our laws by entering this country without permission and give birth to a child, we reward that child with U.S. citizenship. And guarantee of full access to all public and social services this society provides—and that’s a lot of services. Is it any wonder that two-thirds of the babies born at taxpayer expense at county-run hospitals in Los Angeles are born to illegal alien mothers?”