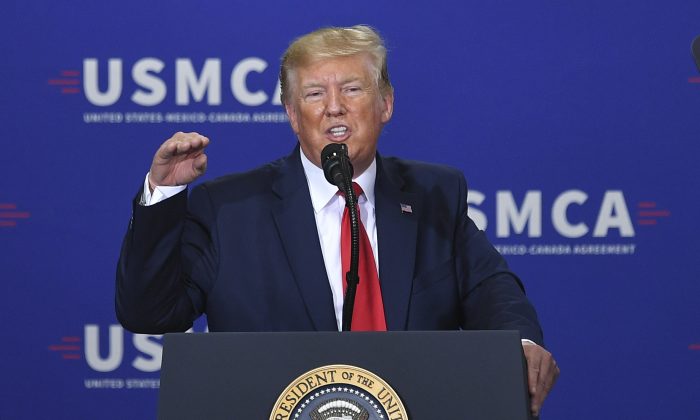 Trump: ICE Deportations Start on Sunday, Will Focus on Criminals

President Donald Trump confirmed that Immigration and Customs Enforcement (ICE) deportations will begin on July 14 and will focus on removing criminals, despite the ongoing opposition against the enforcement operation.

The operation, which will target at least 2,000 illegal immigrants, will affect ten major cities across the nation, two current and one former homeland security officials told the New York Times in an article published on July 11.

The president has faced criticism for his decision to enforce immigration law against illegal immigrants who have ignored their court orders. Many of his opponents have urged him to call off the operation, saying that it would “tear families apart.”

“Families belong together. Every person in America has rights,” Pelosi said at a press conference on July 11. “These families are hard-working members of our communities and our country. This brutal action will terrorize children and tear families apart.”

She also gave advice to illegal immigrants on how they could avoid arrest.

“If ICE agents don’t have a warrant signed by a judge, a person may refuse to open the door and let them in. An administrative order of removal from ICE or immigration authorities is simply not enough. Families belong together; everyone in our country has rights. Many of these families are mixed-status families.”

“ICE will launch raids across 10 major cities this SUNDAY. Check your neighbors & know your rights. Remember: no one can enter your home without a *judicial warrant.* Sometimes ICE will try to show other papers to get in your house. Judicial warrants are from a court,” Ocasio-Cortez wrote.

ICE will launch raids across 10 major cities this SUNDAY.

Check your neighbors & know your rights.

Remember: no one can enter your home without a *judicial warrant.*

Sometimes ICE will try to show other papers to get in your house. Judicial warrants are from a court. /1 https://t.co/g2yktrX3Bw

Trump has again defended the operation on July 12 saying that he has an obligation to enforce laws on people who have broken them.

The people that Ice will apprehend have already been ordered to be deported. This means that they have run from the law and run from the courts. These are people that are supposed to go back to their home country. They broke the law by coming into the country, & now by staying.

“We have millions of people standing in line waiting to become citizens of this country. They’ve taken tests. They’ve studied. They’ve learned English. They’ve done so much. It’s—they’ve been waiting seven, eight, nine years. We have some waiting 10 years to come in.  It’s not fair that somebody walks across the line and now they’ve become citizens of the United States,” Trump said.

The plan to deport illegal immigrants was initially scheduled to begin June 23, but was postponed after details of the operation were leaked to the media causing concerns about the safety of ICE agents.

The Pew Research Center recently found that there were about 10.5 million illegal immigrants present in the United States in 2017.