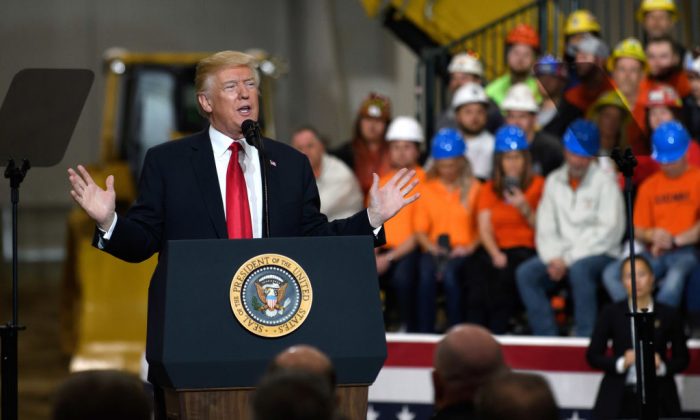 President Donald Trump speaks to a crowd of 300 to 400 people gathered at the Local 18 Richfield Facility of the Operating Engineers Apprentice and Training, a union and apprentice training center specializing in the repair and operation of heavy equipment in Richfield, Ohio, on March 29, 2018. (Jeff Swensen/Getty Images)
Trump Administration

Trump: ‘I love the smell of a construction site’

President Donald Trump pitched his infrastructure plan on Thursday in Ohio. In a campaign-style speech, he talked about a variety of topics including deregulation, tax cuts, and a recent trade deal with South Korea. He also bashed Hillary Clinton for making a bad trade agreement with Koreans, calling it a “horror show.”

Trump said there was no better place to begin the campaign on infrastructure than “the state-of-the-art training site,” where he gave his speech in Richfield, Ohio.

“I have been in construction and building all my life,” Trump said. “I love the smell of a construction site.”

Ohio has been crucial for Trump. He won its 18 electoral votes in the 2016 election, and he has visited the state four times to give speeches since taking office.

“Remember, you can’t win, unless you win the state of Ohio,” he said.

Speaking to a group of union workers about his administration’s infrastructure plan, Trump laid out four principles.

“First we’ll invest in the American worker,” he said.

According to the estimates of his Council of Economic Advisers, the infrastructure plan will create between 290,000 and 414,000 jobs over the 10-year period.

They will be great paying jobs, Trump said.

“For workers without a college degree, these jobs offer wages that are 32 percent higher than other occupations,” he explained.

To develop the workforce for construction projects, Trump has asked Congress to improve federal student aid to include high-quality short-term training programs.

Trump’s second principle for infrastructure is to streamline the permitting process. He called the U.S. federal permitting system “a disaster.”

“It adds tremendous costs and years and years of endless delay to infrastructure projects all across the country,” he said.

Last year, he signed an executive order to speed up the environmental review and permitting process. The order aims to fix the fragmented approval system and establishes a two-year goal to process documents for major infrastructure projects.

The executive order also calls for one federal decision under which the lead agency will work with other relevant agencies to decide whether an infrastructure project goes forward, rather than several different agencies independently giving approval, as had been done before.

Because of the streamlining of the permitting process, Trump said, “So many projects are under construction right now that would never ever in a million years have gotten built.”

His third principle is to help build rural America. The plan sets aside $50 billion in federal money to fund rural infrastructure projects, including broadband.

“These are incredible people, these are hardworking people and they haven’t been taken care of by the Democrats,” he said.

And the fourth principle of the infrastructure plan is to “expand the reach of federal dollars through smart state and local partnerships.”

Trump’s plan proposes that the federal government put up $200 billion over ten years through incentive packages and federal loan programs. And the rest would come from state and local governments as well as private sector.

“Congress now has the opportunity to build on this momentum and to act on a common-sense plan that will make our economy stronger, our roads faster, and our families safer,” Trump said.

“Nearly 40 percent of our bridges were built before … the first moon landing,” he said.

Trump also talked about the revised U.S.-Korea Free Trade Agreement. He called the previous agreement signed by the Obama administration “a horror show.”

Trump said the new deal would level the playing field on steel, cars, and trucks coming into the country.

He also said he might use the new deal as “a very strong card” to get North Korea to denuclearize.

“I may hold it up until after a deal is made with North Korea.”