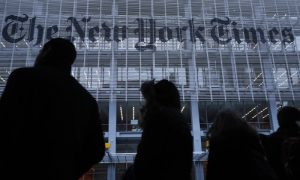 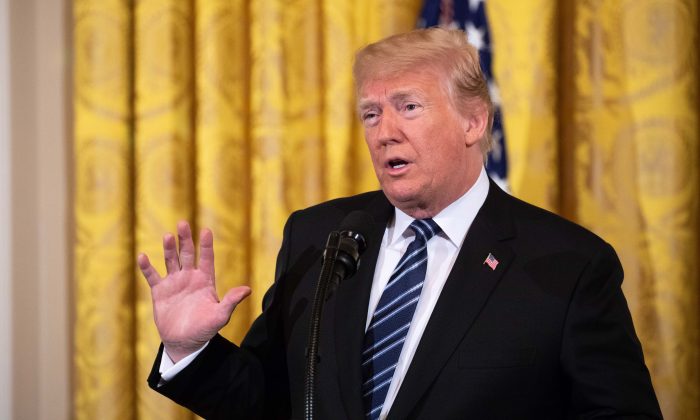 President Donald Trump in the East Room of the White House in Washington, D.C., on May 18, 2018. (Samira Bouaou/The Epoch Times)
Trump Presidency

Trump: ‘I Have the Absolute Right to Pardon Myself, but Why Would I?’

President Donald Trump has presented a legal puzzle to special counsel Robert Mueller: The Constitution says the president can pardon anybody—thus, he can pardon himself.

Trump wrote in a June 4 tweet: “As has been stated by numerous legal scholars, I have the absolute right to PARDON myself, but why would I do that when I have done nothing wrong? In the meantime, the never ending Witch Hunt, led by 13 very Angry and Conflicted Democrats (& others) continues into the mid-terms!”

As has been stated by numerous legal scholars, I have the absolute right to PARDON myself, but why would I do that when I have done nothing wrong? In the meantime, the never ending Witch Hunt, led by 13 very Angry and Conflicted Democrats (& others) continues into the mid-terms!

Trump’s lawyer, Rudy Giuliani, made it clear the president has no intention to actually pardon himself, but that the revelation of the power to do so strengthens the argument of Trump’s legal team that he didn’t obstruct justice.

Mueller was appointed to look into whether the Russian government interfered in the 2016 presidential election and whether the Trump campaign colluded with any such effort. After a year of investigations, Mueller hasn’t produced proof of any such collusion and appears to have shifted toward a search for evidence that Trump impeded the investigation.

The pardon issue was brought up by The New York Times after two confidential memos sent by Trump’s lawyers to Mueller were leaked to the paper, which published them on June 2.

“It remains our position that the President’s actions here, by virtue of his position as the chief law enforcement officer, could neither constitutionally nor legally constitute obstruction because that would amount to him obstructing himself, and that he could, if he wished, terminate the inquiry, or even exercise his power to pardon if he so desired,” the January memo stated.

It’s not clear what the full context of the statement was, because it refers, among other things, to a Jan. 8 conversation between Trump’s lawyers and the Mueller team. The New York Times speculated it may mean that Trump could pardon himself.

ABC’s George Stephanopoulos then raised the idea with Giuliani during an interview on June 3.

He called it an interesting constitutional question.

“It would probably get answered by, ‘Gosh, that’s what the Constitution says, and if you want to change it, change it, but yes.’”

Article II of the Constitution states that the president “shall have power to grant reprieves and pardons for offenses against the United States, except in cases of impeachment.”

It’s has been interpreted to apply to federal offenses, not to the breaking of state laws.

No president has attempted to pardon himself, but some lawyers have opined on the topic.

During the impeachment inquiry on President Bill Clinton in 1998, Rep. Bob Goodlatte (R-Va.) mentioned that there’s “a prevailing opinion that a President of the United States can exercise the power of pardon on himself.”

Clinton’s counsel, Charles Ruff, was even explicitly asked to give an assurance that “Clinton will not pardon himself or that he will not accept a pardon from any presidential successor.” Ruff agreed.

During the Nixon years, in 1974, Mary Lawton, acting assistant attorney general in the Office of Legal Counsel, opined that the president couldn’t pardon himself “[u]nder the fundamental rule that no one may be a judge in his own case,” citing the disqualification rule. But the rule specifically refers to judges. Lawton didn’t explain why such a rule would supersede the Constitution.