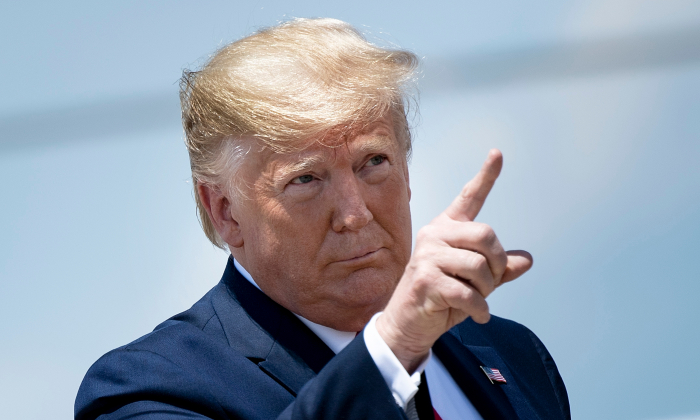 President Donald Trump boards Air Force One at Joint Base Andrews in Maryland on June 26, 2019. (Brendan Smialowski/AFP/Getty Images)
US News

Trump: ‘I Had a Falling Out’ With Jeffrey Epstein ’15 Years Ago’

President Donald Trump said that he and Jeffrey Epstein had “a falling out” many years ago and had not spoken since.

Trump spoke about his relationship with the financier, who was charged with sex trafficking on July 8, while in the Oval Office on Tuesday.

The president then said that he and Epstein parted ways a number of years ago.

President Trump on Jeffrey Epstein: “I had a falling out with him a long time ago, I don’t think I’ve spoken to him for 15 years. I wasn’t a fan…I was not a fan of his…I feel very badly actually for Secretary Acosta.” pic.twitter.com/vtIOCUhH8s

Trump reportedly spent time with Epstein off-and-on throughout the the late 1990s and 2000s. In 2002, Trump said, according to the anti-Trump New York magazine, that Epstein was a “terrific guy.”

“He’s a lot of fun to be with. It is even said that he likes beautiful women as much as I do, and many of them are on the younger side. No doubt about it—Jeffrey enjoys his social life,” Trump reportedly added.

Court documents obtained by the right-leaning Daily Caller website showed Trump banned Epstein from his Mar-a-Lago resort in an unspecified year after Epstein allegedly sexually assaulted an underage girl at the club.

Epstein’s brother Mark said in a court deposition that Trump flew on one of his planes from Florida to New York sometime in the late ’90s. “I think he wanted a ride back to New York, ” Mark Epstein said. The documents note that former president Bill Clinton was on Epstein’s airplane at least 10 times.

In 2009, attorney Brad Edwards, who represented a number of girls who said they were victims of Epstein, served Trump with a subpoena to get him to testify in a case against Epstein.

Edwards said recently that he served a number of subpoenas to powerful people connected to Epstein and Trump was “the only person who picked up the phone and said ‘let’s just talk, I’ll give you as much time as you want, I’ll tell you what you need to know,’ and was very helpful in the information that he gave, and gave no indication whatsoever that he was involved in anything untoward.”

Trump was accused by a woman who wasn’t named during the 2016 presidential campaign of rape during a party thrown by Epstein when she was 13 years old in 1994.

Anti-Trump journalists attempted to help bolster the claim but came away believing it wasn’t true. “The facts speak less to a scandal and more, perhaps, to an attempt at a smear,” wrote one.

The suit was dropped after the election.

Trump said during the campaign that Clinton might have a connection to Epstein, saying: “Nice guy—uh, got a lot of problems coming up, in my opinion, with the famous island, with Jeffrey Epstein. A lot of problems.”