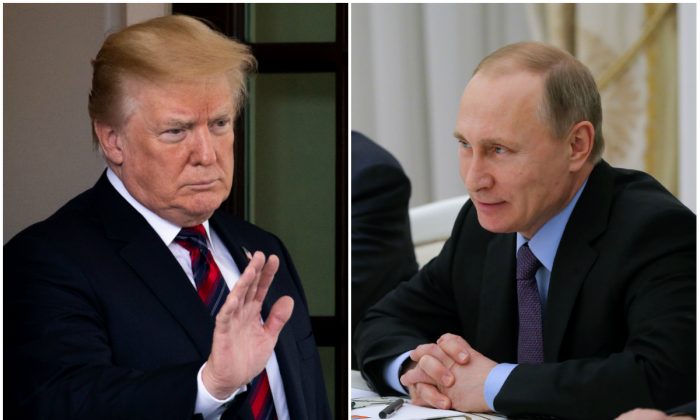 WASHINGTON—Much as he did for the recent summit with North Korean dictator Kim Jong Un, President Donald Trump is going into the upcoming meeting with Russian President Vladimir Putin with eyes wide open.

U.S. Ambassador to Russia Jon Huntsman said the president is likely to bring up a range of difficult topics with Putin on July 16 in Helsinki.

“The president hopes that a meeting can help reduce tensions and lead to constructive engagement that improves peace and security around the world—because you can’t solve problems if you’re not talking about them,” Huntsman said during a media call on July 5.

“And [we] need to make sure that we’re willing, on our side, to hold Russia responsible for the many activities that they are responsible for, whether that is election meddling; malign activities throughout Europe, including the Balkans, the UK and Brexit, France, and Italy, just to mention a few; and to hold them responsible for this new form of warfare—hybrid warfare—that we have seen most recently.”

He said all U.S. presidents since the Cold War have tried to reset the Russia relationship.

“And in each case, it has led to a boom and a bust cycle. And inevitably, that has left the relationship worse off and with deep disappointments,” he said.

“So given the challenges and the difficulties in accepting where we need to find ourselves in this relationship, one of the most important things for us to do is to conclude that we need a sober assessment of the root causes of our problems.”

Huntsman said many issues with Russia accumulated in the years before Trump took office.

“The president believes a better relationship with Russia would be good for both America and Russia, but the ball really is in Russia’s court,” he said.

White House deputy press secretary Hogan Gidley said on July 3 that the president believes Russia meddled in the 2016 U.S. presidential election. However, Trump has hedged his bets on Twitter.

“I never said Russia did not meddle in the election,” Trump wrote on Twitter on Feb. 18. “I said ‘it may be Russia, or China or another country or group, or it may be a 400 pound genius sitting in bed and playing with his computer.’”

Trump said he brought the meddling issue up with Putin at a sideline meeting during the G-20 in Hamburg last year.

“I strongly pressed President Putin twice about Russian meddling in our election. He vehemently denied it. I’ve already given my opinion,” Trump wrote on Twitter on July 9, 2017, after the meeting.

Trump and Putin also had a brief conversation during the APEC meeting in Vietnam last November.

Then Trump and Putin will arrive separately to the Presidential Palace, where they will conduct a one-on-one meeting prior to an expanded bilateral meeting and a working lunch.