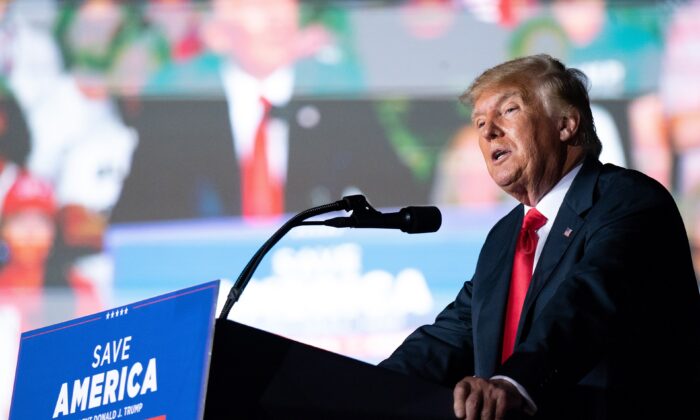 Former President Donald Trump held a rally in Perry, Georgia, over the weekend, continuing his claims challenging the 2020 presidential election results and hinting at a potential run for 2024.

Trump called on his supporters to “save America” which he says begins with an “earth-shattering” victory in 2022 “to be followed by an even more glorious victory in November of 2024.”

Trump had disparaging words for the state’s incumbent Secretary of State Brad Raffensperger, Lt. Gov. Geoff Duncan, and Gov. Brian Kemp—all Republicans who have been vocal in opposing Trump’s claims of a fraudulent 2020 presidential election which declared President Joe Biden the winner.

Trump told the crowd he would have rather seen Democrat Stacey Abrams win the Georgia gubernatorial race in 2018.

The final, certified election results have Biden winning that county, which includes Phoenix, by 45,000 votes—key to Biden’s 10,500-vote win in the state. The audit, which was backed by state Republicans and conducted by the cyber security firm Cyber Ninjas, included a hand count of votes tallying 360 more votes for Biden than the official results.

“It confirmed what we have all known for some time,” said White House press secretary Jen Psaki following its release Friday.

But the report also questions the legality of about 50,000 of the ballots cast. It claims 23,344 mail-in ballots were voted from an individual’s former address, 9,041 mail-in ballots were returned than were mailed out to voters, and 5,295 voters that potentially voted in multiple counties. It also questions the validity of thousands of more votes saying they did not match who voted, were duplicate ballots, or were cast by voters who moved out of Maricopa County.

Trump sees this as evidence of his victory in the county and more broadly the national election, urging further investigation into the matter.

“If we don’t think about the past you’ll never win again in the future because it’s all rigged,” he said at the rally.

The report’s findings have been contested by local officials. Members of the Republican-led Maricopa County Board of Supervisors, which oversees elections, wrote on Twitter: “The #azaudit draft report from Cyber Ninjas confirms the county’s canvass of the 2020 General Election was accurate and the candidates certified as the winners did, in fact, win.”

And again: “Unfortunately, the report is also littered with errors & faulty conclusions about how Maricopa County conducted the 2020 General Election.”

Trump also brought up the recent indictment of a cyber security lawyer involved in Hillary Clinton’s 2016 presidential campaign. The indictment alleges Michael Sussmann lied to the FBI about his involvement with the campaign when he provided the agency with data alleging a mysterious computer backchannel between the Trump Organization and a Russian bank. An FBI investigation later found no evidence of a secret backchannel.

“They made up a hoax and we had to live with it for three years,” said Trump at the rally.

Trump also slammed Biden for his management of the U.S. military withdrawal from Afghanistan and the recent flood of illegal immigrants at the U.S. southern border calling it “the worst border situation in history of the world.”