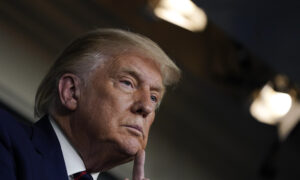 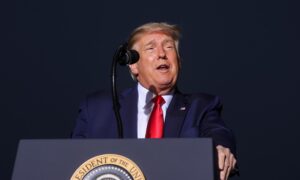 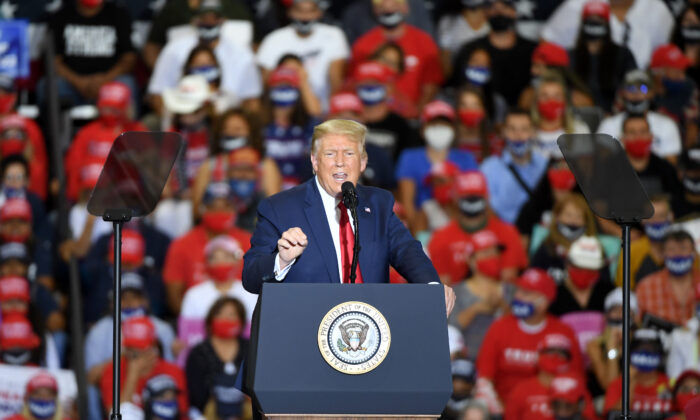 President Donald Trump held an indoor rally at a warehouse outside Las Vegas, defying Nevada Gov. Steve Sisolak and urging him to “open up your state.”

At Sunday night’s rally in Henderson, Trump criticized the Democrat governor, who earlier reprimanded the president for holding a large event in violation of the state’s restrictions on public gatherings amid the pandemic, which are currently limited to 50 people.

Sisolak, who said in a tweet that Trump was “taking reckless and selfish actions that are putting countless lives in danger here in Nevada,” claimed the president was placing himself above the law by ignoring the state’s emergency directives and dismissing concerns by local officials about the rally.

Parts of Nevada’s economy remain in lockdown, in line with a re-opening plan (pdf) that evaluates each county according to case and testing positivity rates. Clark County, where the rally took place, saw 186 new COVID-19 cases between Sept. 9-11, accounting for 71.5 percent of all new infections in Nevada in that timeframe, according to a press bulletin issued by health authorities (pdf). The Nevada COVID-19 Mitigation & Management Task Force on Sept. 10 voted to keep bars and taverns in Clark County closed. Casinos and restaurants are operating at half capacity.

Speaking to supporters at the rally, Trump made a pitch for reopening.

“We are not shutting the country again. A shutdown would destroy the lives and dreams of millions Americans,” Trump said, adding, “We will very easily defeat the China virus.”

Trump’s rally in Henderson followed one on Sept. 12 in Minden, Nevada, near Lake Tahoe. At that event, Trump also spoke about Sisolak, saying the governor was trying to stop the Trump campaign from holding the rally and suggested he may try to “rig the election” because “he’s in control of millions of votes,” before leveling a broadside at Democrat-led states over large-scale vote-by-mail initiatives, which he has repeatedly argued carry a high risk of fraud.

Earlier Sunday, Trump aimed for further inroads with Latinos, who could prove vital in closely contested states that could determine the White House race, promoting economic gains they made before the outbreak of the Chinese Communist Party (CCP) virus.

“Hispanic Americans enrich our nation beyond measure,” Trump said at the roundtable, adding, “they proudly serve our nation in the military, as members of law enforcement, and they also start small business. I can tell you from personal experience, you’re very good businessmen and women, very, very good, extraordinary actually. They promote the shared values of faith and family, hard work, and patriotism. Hispanic Americans embody the American dream.”

Trump then said Hispanic Americans understand and sympathize with his calls for border security.

“They want law and order and they want people to come in—so do I—but they want them to come in through a process and legally,” Trump said, before taking a swipe at his rival in the presidential election, Democratic nominee Joe Biden.

“Joe Biden has spent 47 years betraying the Hispanic American community. Sending their jobs to China, raising taxes on their families and small businesses, making their communities less safe, attacking their values and trapping their children in failing government schools,” Trump said, adding that a successful Democrat bid for the White House would threaten school choice policies and the right to bear arms.

Kudlow: Pelosi Has ‘No Intention of Compromising’ in Stimulus Negotiations
0