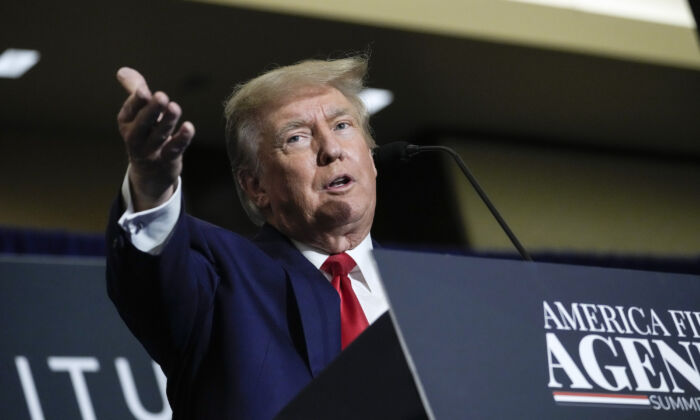 Less than a week before New York’s congressional primaries, former President Donald Trump has chosen to “endorse” two of his Democratic adversaries there with needling social media posts.

One is Dan Goldman, lead counsel during Trump’s first impeachment in 2019. He is a candidate in New York’s 10th Congressional District Democratic primary election in New York City.

The other is Carolyn Maloney, the 12th Congressional District longtime incumbent, who retorted by posting a New York Times story labeling her one of Trump’s “fiercest critics.” She’s running against fellow longtime incumbent Jerrold Nadler, who represents the current 10th District but moved to the 12th when the new congressional map moved the lines.

“Lawyer Dan Goldman is running for Congress, NY-10, and it is my great honor to Strongly Endorse him,” Trump wrote on his Truth Social platform Wednesday evening. “I do this not because of the fact that he headed up the Impeachment Committee and lost, but because he was honorable, fair, and highly intelligent. While it was my honor to beat him, and beat him badly, Dan Goldman has a wonderful future ahead.

“He will be very compassionate and compromising to those within the Republican Party, and will do everything possible to make sure they have a fair chance at winning against the Radical Left Democrats, who he knows are destroying our Country. I would like to thank Dan for fighting so hard for America, and for working so tirelessly to stop ‘Trump.’ He was not easy to beat, but winning against him made me realize just how very talented I am!”

He also had words to say about Maloney, and a few for Nadler, as well:

“A vote for Carolyn Maloney in NY-12 is a vote for the future! She is a kind and wonderful person, who has always said terrific things about me, and will support me no matter what I do, just as I supported her very early on. She begged for a check with no quid pro quo, and I gave it to her. In fact, I gave her many.

“On the other hand, Jerry Nadler is likewise a hard driving man of the people, whose energy and attention to detail is unlike anyone else in Congress. He is high energy, sharp, quick-witted, and bright. You can’t go wrong with either, but Carolyn Maloney is the better man. She will lead our Country into a very GREEN and prosperous future. Carolyn has my Complete and Total Endorsement, she will never let our Conservative Movement down!”

Maloney, in her posts, was apparently not amused:

“Trump may think his fake ‘endorsement’ is going to hurt me in my race to represent #NY12 but he doesn’t know that NYers see through his trolling,” she wrote on Twitter. “What is clear is I’m the candidate he’s most afraid will win.”

“He’s just having fun with it,” Trump spokeswoman Liz Harrington told The Epoch Times. “The whole situation is laughable. A Maloney and a Nadler. They’re low-hanging fruit. He’s pointing out the absurdity of these two people who have been in Washington for decades, longer than dirt. They’re the party of the future? They’ll really bring some change? He’s pointing out how ridiculous they are.”

“I think he’s trolling them,” Jacob Neiheisel, a political science professor at the state’s University at Buffalo, specializing in politics in media, told The Epoch Times. “He seems to be entertained by this personally. It also has the dual effect of keeping his supporters engaged in thinking about Trump, who is, in their worldview, fighting for them. He’s getting mileage out of ‘owning the libs.'”

There’s another aspect, Neiheisel said: the Democrats have been doing something similar lately. “It’s like Democratic efforts to pick the more extreme (Republican) candidate in some of these primaries. If the winner is someone weaker, all the better for the (Democratic) Party.”

“There are many levels of hysterical here,” upstate Republican politico Carl Calabrese, told The Epoch Times. “He’s playing multidimensional chess. One: he’s being Trump, very sarcastic and satirical, knowing the left won’t get it and their heads will explode. There’s nothing Trump likes better than watching Democratic heads explode.”

“Two: He’s giving them a taste of their own medicine. We know Democratic governors spent millions of dollars supporting Trump supporters to get them elected, because they thought they would be easier to beat in the general election.”

Calabrese said another satirical angle Trump might play follows Election Day. If the endorsed candidate wins, Trump can take credit. If they lose, he can take credit for that, on the theory that Trump-hating Democrats who see red at anything Trump touches vote against his “endorsed” candidate.

“He’s got them boxed. No matter what happens, he can claim victory,” Calabrese said. He noted an observation made by writer Salena Zito: “Trump’s supporters take him seriously but not literally. His detractors take him literally but not seriously.”

Neiheisel said Trump is, in fact, someone who cues people to react, one way or the other. One study showed radically different reactions to the same statements when attributed to socialist Sen. Bernie Sanders (I-Vt.)—who actually made them—than if attributed to Trump. “Appending Trump’s name to absolutely anything can influence it,” he said.

Could that make a difference in either of these primaries? Probably not. But it’s not impossible in the 10th, a free-for-all including Goldman, incumbent 17th District Congressman Mondaire Jones, former Congresswoman Liz Holtzman, and nine other candidates still in the race. Former New York Mayor Bill de Blasio entered it but dropped out.

Twelve candidates are splitting a turnout predicted to be historically low. New York’s primary was cleaved into two parts after a court imposed new congressional redistricting maps. This second primary, Aug. 23, falls in what many New Yorkers think of as “beach week,” summer’s last hurrah before children return to school after Labor Day. Some analysts forecast as few as 10 percent of voters turning out.

With 12 candidates splitting that small a vote, even a few votes switching—solely because the voter likes or dislikes Trump—could make a difference, Neiheisel said.

“He’s getting some payback,” Calabrese said. “And he can take credit either way. If they win, it was his endorsement, and if they lose, it was his social media judo.”