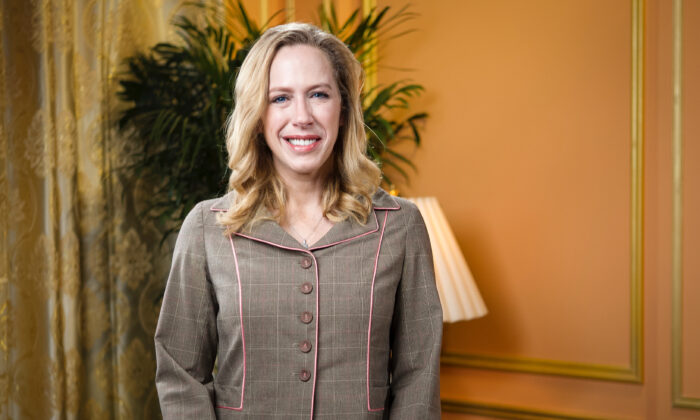 Kimberley Strassel on How the Anti-Trump ‘Resistance’ Erodes US Institutions

The anti-Trump “Resistance” has devastated core American institutions and broken longstanding political norms in seeking to defeat and now oust from office President Donald Trump, said Kimberley Strassel, a columnist for the Wall Street Journal and member of the Journal’s editorial board.

“And this, to me, is the irony, right? We’ve been told for three years that Donald Trump is wrecking institutions,” Strassel said in an interview with The Epoch Times for the “American Thought Leaders” program.

The damage inflicted by the anti-Trump Resistance is the subject of Strassel’s new book, “Resistance (At All Costs): How Trump Haters Are Breaking America.”

Strassel uses the term “haters” deliberately, to differentiate this demographic from Trump’s “critics.”

“The ‘haters’ can’t abide nuance. To the Resistance, any praise—no matter how qualified—of Trump is tantamount to American betrayal,” Strassel writes in “Resistance (At All Costs).”

She told The Epoch Times: “Up until the point at which Donald Trump was elected, what happened when political parties lost is that they would retreat, regroup, lick their wounds, talk about what they did wrong.

“That’s not what happened this time around. Instead, you had people who essentially said we should have won.”

From the moment Trump was elected, this group believed Trump to be an illegitimate president and therefore felt they could use whatever means necessary to remove him from office, Strassel said.

“One thing I try really hard to do in this book is enunciate what rules and regulations and standards were broken, what political boundaries were crossed, because I think that that’s where we’re seeing the damage,” Strassel said.

The “unprecedented acts” of the Resistance have caused the public to lose trust in longstanding institutions such as the FBI, the CIA, and the Department of Justice, and cheapened important political processes like impeachment, she said.

The Resistance fabricated and pushed the theory that it was Trump’s collusion with Russia that won him the presidency, not the support of the American people, and lied about the origins of the so-called evidence—the Steele dossier—that was used by the FBI to justify a counterintelligence investigation into the Trump campaign, Strassel said.

“We have never, in the history of this country, had a counterintelligence investigation into a political campaign,” she said.

In an anecdote that Strassel recounts in her book, she asked former House Intelligence Committee Chairman Devin Nunes (R-Calif.) if there was anything in America’s laws that could have prohibited this situation.

Nunes, who had helped write or update many laws concerning the powers of the intelligence community, replied, “I would never have conceived of the FBI using our counterintelligence capabilities to target a political campaign.

“If it had crossed any of our minds, I can guarantee we’d have specifically written: ‘Don’t do that.’”

In Strassel’s view, the Resistance is partially fueled by deep-seated anger, or what others have termed “Trump derangement syndrome”—an inability to look rationally at a man so far outside of Washington norms.

But at the same time, in Strassel’s view, much of the Resistance is motivated by a desire to amass political power using whatever means necessary.

“That involves removing the president who won. That involves some of these other things that you hear them talking about now: packing the Supreme Court, getting rid of the electoral college, letting 16-year-olds vote,” she said.

“These are not reforms. Reforms are things that the country broadly agrees are going to help improve stuff. This is changing the rules so that you get power, and you stay in power.”

The impeachment inquiry into the president, based on his phone call with Ukraine’s president, is just another example of how the Resistance is violating political norms and relying on flimsy evidence to try to remove him from office, she said.

Testimony in the inquiry has taken place behind closed doors, led by three House committees, and Democrats have so far refused to release transcripts from the depositions of former and current State Department employees.

“[Impeachment] is one of the most serious and huge powers in the Constitution. It was meant always by the founders to be reserved for truly unusual circumstances. They debated not even putting it in because they were concerned that this is what would happen,” Strassel said.

In the impeachment inquiries against Richard Nixon and Bill Clinton, Strassel said, American leaders “understood the great importance of convincing the American public that their decision to use this tool was just and legitimate.

“So if you look back at Watergate, they had hundreds of hours of testimony broadcast over TV that people tuned into and watched. It’s one of the reasons that Richard Nixon resigned before the House ever held a final impeachment vote on him, because the public had been convinced. He knew he had to go,” she said.

But now, instead of access to the testimonies, the public is receiving only leaked snippets and dueling narratives.

“You have Democrats saying, ‘Oh, this is very bad.’ And Republicans saying, ‘Oh, it’s not so bad at all.’ What are Americans supposed to think?” Strassel said.

Within the federal bureaucracy, there is a “vast swath of unelected officials” who have “a great deal of power to slow things down, mess things up, file the whistleblower complaints, leak information, actively engage against the president’s policies,” Strassel said. “It’s their job to implement his agenda. And yet a lot of them are part of the Resistance, too,” she said.

Data shows that in the lead-up to the 2016 presidential election, government bureaucrats overwhelmingly contributed toward the Clinton campaign over the Trump campaign.

Ninety-five percent, or about $1.9 million, of bureaucrats’ donations went to Clinton, according to The Hill’s analysis of donations from federal workers up until September 2016. In particular, employees at the Department of Justice gave 97 percent of their donations to Clinton. For the State Department, it was even higher—99 percent.

“Imagine being a CEO and showing up and knowing that 95 percent of your workforce despises you and doesn’t want you to be there,” Strassel said.

Strassel pointed to when former acting Attorney General Sally Yates, a holdover from the Obama administration, publicly questioned the constitutionality of Trump’s immigration ban and directed Justice Department employees to disobey the order.

“It was basically a call to arms,” Strassel said. “What she should’ve done is honorably resigned if she felt that she could not in any way enforce this duly issued executive order.

“It really kicked off what we have seen ever since then: The nearly daily leaks from the administration, the whistleblower complaints,” as well as “all kind of internal foot-dragging and outright obstruction to the president’s agenda.”

According to a report by the Senate Committee on Homeland Security and Governmental Affairs, in Trump’s first 126 days in office, his administration “faced 125 leaked stories—one leak a day—containing information that is potentially damaging to national security under the standards laid out in a 2009 Executive Order signed by President Barack Obama.”

Strassel says the media has played a critical role in bolstering the anti-Trump Resistance.

“I’ve been a reporter for 25 years,” Strassel said. “I’ve always felt that the media leaned left. That wasn’t a surprise to anyone. “But what we’ve seen over the past three years is something entirely different. This is the media actively engaging on one side of a partisan warfare. It’s overt.”

Along the way, the media have largely abandoned journalistic standards, “whether it be the use of anonymous sources, whether it be putting uncorroborated accusations into the paper, whether it’s using biased sources for information and cloaking them as neutral observers,” she said.

Among the many examples of media misinformation cited in Strassel’s book is a December 2017 CNN piece that claimed to have evidence that then-candidate Trump and his son Donald Trump Jr. had been offered early access to hacked emails from the Democratic National Committee. But it turned out the date was wrong. Trump Jr. had received an email about the WikiLeaks release one day after WikiLeaks had made the documents public.

“If it hurts Donald Trump, they’re on board,” Strassel said. And in many cases, the attacks on Trump have been contradictory.

“He’s either the dunce you claim he is every day or he’s the most sophisticated Manchurian candidate that the world has ever seen. You can’t have it both ways.

“He’s either a dictator and an autocrat who is consolidating power around himself to rule with an iron fist, or he’s the evil conservative who’s cutting regulations.”

Contrary to claims of authoritarianism, Trump has significantly decreased the size of the federal government. Notably, he reduced the Federal Register, a collection of all the national government’s rules and regulations, to the lowest it’s been since Bill Clinton’s first year in office.

“You can’t be a libertarian dictator,” Strassel said.

In addition to the barrage of attacks on Trump, the media has actively sought to “de-legitimize anybody who has a different viewpoint than they do, or who is reporting the facts and the story in a way other than they would like them to be presented.”

“They would love to make it sound as though none of us are worthy of writing about this story,” she said.

Instead, “they indulged this behavior,” Strassel said. “We had a media cheerleading the FBI for meddling in American politics. Can you ever imagine a time in American history where the media would have played such a role?

“In a way, I blame that for so much else that has gone wrong.”

Strassel says the actions taken by the Resistance will have long-term consequences for America.

“I keep warning my friends on the other side of the aisle: Think about the precedent you are setting here,” Strassel said. For example, if Joe Biden wins the presidency in 2020 but Republicans take back the House, would the Republican-dominated House immediately launch impeachment proceedings against Biden for alleged corruption in Ukraine?

“I wouldn’t necessarily use the word [corruption], but there’s a lot of Republicans who happily would. And if they thought they’d get another shot at the White House, why not?” Strassel said.

It’s short-term thinking, she said, just like Sen. Harry Reid’s decision in 2013 to drop the number of votes needed to overcome a filibuster for lower-court judges.

“Did he really stop to think about the fact that it paved the way for Republicans to get rid of the filibuster for Supreme Court judges?” Strassel said.

If there’s any rule in Washington, “it’s that when you set the bar low, it just keeps going lower,” Strassel said.

“Donald Trump is going to be president for at most another five years. But the actions and the destruction that’s coming with some of this could be with us for a very long time,” she said.

“Should anyone allow their deep disregard for one particular man to so change the structure and the fabric of the country?”