Trump Has Secured Funding for More Than Half of Border Wall 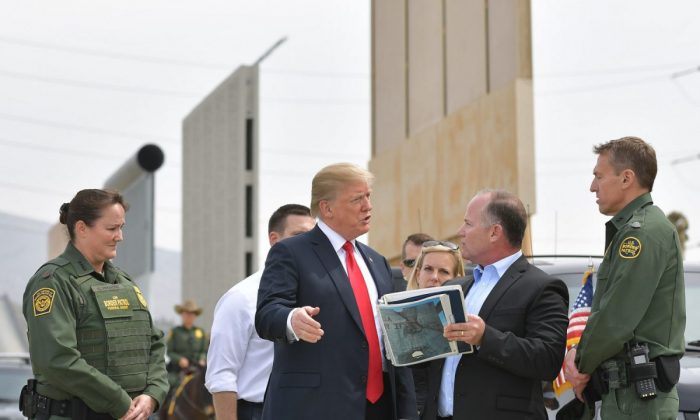 One hundred eleven miles of new or replacement wall is either being built or is in progress on the southern border after Trump’s first two years in office, an administration official tells The Daily Caller.

All told, the administration has secured funding for approximately 445 miles of the total 722 miles desired by the Trump administration, a Caller analysis finds. The analysis holds only if all national emergency and executive action funding is upheld in court challenges.

The administration official stressed that this figure constitutes only 18-foot bollard wall fencing or 32-foot levee wall fencing, which is the barrier that Trump has emphasized as necessary.

The wall accounting begins in Fiscal Year 2017 in which $341 million was obligated for replacement wall in California, New Mexico, and Texas. This money funds construction for 40 miles of new or replacement wall of which 37 miles is completed or in progress.

The national emergency declaration was quickly challenged in court by 16 states, organized by the State of California and filed in the Federal District Court in San Francisco, which appeals to the 9th Circuit Court of Appeals.

Officials could not provide a complete estimate of the wall that will be built with the 2019 funds, though they noted that it costs approximately $25 million per mile, putting an estimate at 323 miles of additional border wall. The administration official cautioned that wall funding costs can vary because of terrain but noted that Trump’s actions lack the restrictions of previous appropriations to build wall in much needed areas, like the Rio Grande Valley Sector.

Amber Athey contributed to this report.