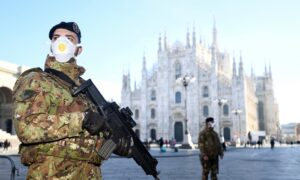 US Starts Clinical Trial of Remdesivir as Possible Coronavirus Treatment
0 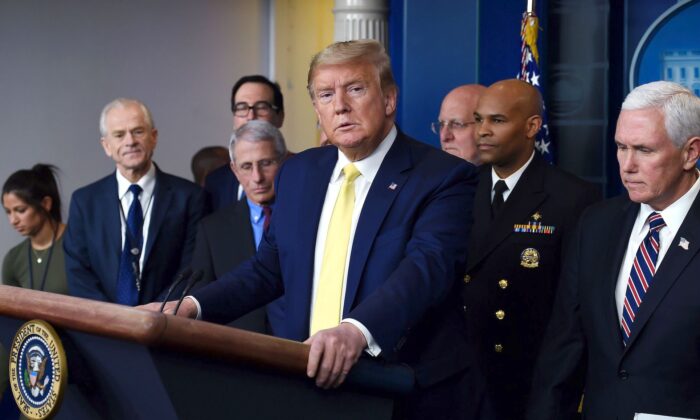 President Donald Trump speaks about the COVID-19 (coronavirus) alongside members of the Coronavirus Task Force in the Brady Press Briefing Room at the White House in Washington, on March 9, 2020. (Olivier Douliery/AFP via Getty Images)
AMERICA

White House Press Secretary Stephanie Grisham said that President Donald Trump has not been tested for COVID-19, the disease caused by the new coronavirus.

“The President has not received COVID-19 testing because he has neither had prolonged close contact with any known confirmed COVID-19 patients nor does he have any symptoms. President Trump remains in excellent health, and his physician will continue to closely monitor him,” she said in a statement released late Monday.

Rep. Mark Meadows (R-N.C.), who Trump named on Friday as his new chief of staff to replace Mick Mulvaney, also announced that he is undergoing self-quarantine for the same reason.

Trump and Vice President Mike Pence were among those who attended CPAC. Organizers of CPAC said that an attendee tested positive for the virus at a hospital in New Jersey, and was put under self-quarantine. The organizers noted that “[t]his attendee had no interaction with the President or the Vice President and never attended the events in the main hall.”

Another member of Congress, Rep. Julia Brownley (D-Calif.), said on Monday that she and her staff would work remotely after she found out that she had interacted with a person in Washington, D.C. who tested positive for the virus.

The novel virus SARS-CoV-2 that causes the disease COVID-19 emerged in early December 2019 in the central Chinese city of Wuhan, a city of about 11 million people. The virus is in the same family of pathogens that cause the flu and SARS (severe acute respiratory syndrome).

The most common symptoms of COVID-19 are fever, coughing, and difficulty breathing, although Chinese researchers have noted other symptoms, such as fatigue, diarrhea, chest pains, and headaches.

Trump announced a coronavirus task force on Jan. 29 to monitor and combat the virus. The task force has been meeting daily. Trump later on Jan. 31 declared a public health emergency in the United States just a day after the World Health Organization decided to declare the COVID-19 outbreak a public health emergency of international concern. The Trump administration also suspended travel from China to the United States.

Read More
Here’s How to Tell If You Have the Coronavirus, and When You Should See a Doctor
The Coronavirus Outbreak: What We Know and Tips to Stay Safe
Follow Mimi on Twitter: @MimiNguyenLy
TOP NEWS