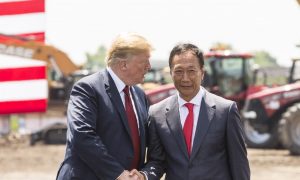 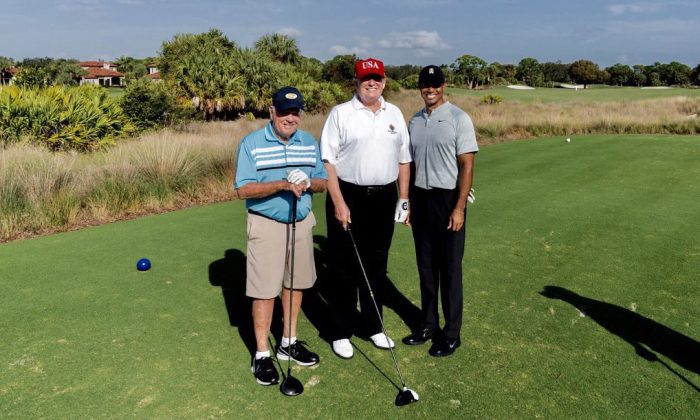 Trump Golfs With Tiger Woods, Jack Nicklaus at His Club in Florida

President Donald Trump has hit the golf course with legendary golfers Tiger Woods and Jack Nicklaus at Trump National Golf Club in Jupiter, Florida, according to a tweet the president posted on Feb. 2.

“Great morning at Trump National Golf Club in Jupiter, Florida with @JackNicklaus and @TigerWoods!” Trump tweeted along with a photo of himself with the two legendary golfers.

The post was made a day after Trump arrived in Florida, escaping the cold and snow in Washington. This is Trump’s first trip to Florida since Thanksgiving. He was supposed to spend time there during Christmas but chose to cancel his plans and remain in Washington due to the 35-day partial government shutdown. The shutdown ended on Jan. 25 after the president signed a short-term spending bill.

Both Nicklaus and Woods are among Trump’s regular golf partners. Nicklaus also designed the Jupiter club’s 18-hole course, according to club’s website.

Nicklaus and Woods are defined by their major championships. Nicklaus holds the professional record with 18 while Woods has been stuck on 14 for the past 10 years.

🚨I’m not sure if this has been reported by anyone yet or not. I just received these pics. Tiger is at Trump Jupiter today on the course with Jack Nicklaus and Donald Trump. This is a non political tweet, of course — but I’m reporting the info. pic.twitter.com/Jjpe9e60TW

Woods has had a recent win at the 2018 Tour Championships. Meanwhile, Nicklaus won 70 official events on the PGA TOUR between 1962 and 1986, and was the oldest winner in Masters Tournament history at age 46, according to World Golf Hall of Fame.

The pairing on Feb. 2 was believed to be the first time Nicklaus and Woods have played together since 2002 at a Monday night exhibition called “Battle at Bighorn” in California. Nicklaus and Woods were teammates in a match against Lee Trevino and Sergio Garcia.

The last time Nicklaus and Woods played together in an official event was the 2000 PGA Championship.