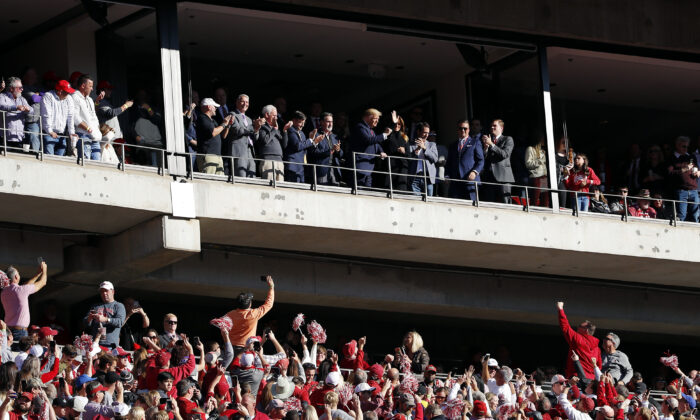 During the University of Alabama-Louisiana State University game, President Donald Trump and First Lady Melania Trump received enthusiastic cheers and chants when their presence was brought to the attention of the crowd.

The Trumps attended the event at Bryant-Denny Stadium in Tuscaloosa on Saturday, watching LSU defeat Alabama 46-41.

Byrne is running against former Sen. Jeff Sessions, who represented Alabama for a number of years before he became Trump’s attorney general. Both Republican candidates are looking to unseat Sen. Doug Jones (D-Ala.), who took office in 2018.

According to AL.com, Trump’s introduction was planned for the game’s first timeout. When the game went to a commercial, Trump rose from his chair and drew applause and cheers from the crowd.

“USA! USA! USA!” is what the crowd chanted, according to video footage.

“Much like the scene at today’s football game, Doug Jones’s far-left agenda in Alabama consistently puts the Democrat on the outside looking in while President Trump can always be found in the arena fighting and boosting the Yellowhammer State to new heights,” he told AL.com.

Trump won 63 percent of the Alabama vote during the 2016 election.

“I love Alabama,” Trump stated on Friday ahead of the game, according to Fox News. “I’m going to go watch a very good football game, which is tomorrow with LSU, and it’s going to be great.”

“Well, it’s an honor, I think, that the president of the United States would be interested enough to come to the game,” Nick Saban said Wednesday, reported the Montgomery Adviser. “I’m sure we’ll do everything we can to welcome him.”