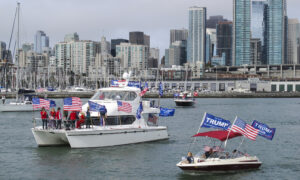 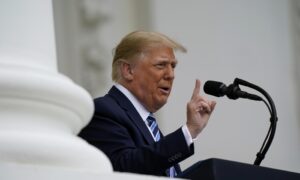 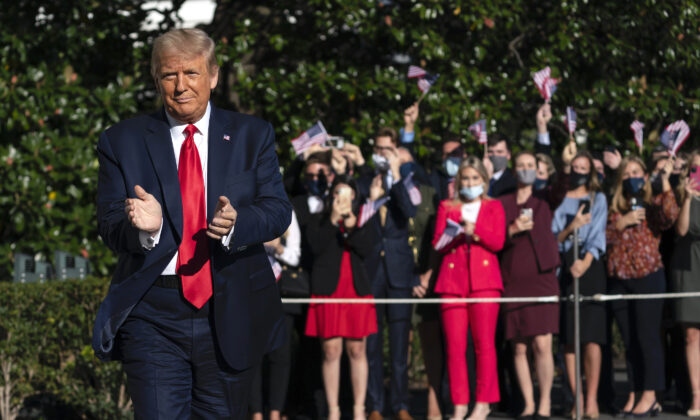 President Donald Trump walks over to talk with reporters before boarding Marine One on the South Lawn of the White House in Washington on Oct. 14, 2020. (Evan Vucci/AP Photo)
Socialism & Freedom

President Donald Trump on Oct. 14 touted his administration’s accomplishments on the economy, claimed the policies proposed by Democrats would lead to a “steep depression,” and characterized the Nov. 3 presidential election as a choice between “a socialist nightmare and the American dream.”

In the 2020 election, “the choice facing America is simple. It’s the choice between historic prosperity under my pro-American policies, or very crippling poverty and a steep depression under the radical left. And that’s what you’ll have, is a depression,” he told the Economic Clubs of New York, Pittsburgh, Florida, Washington, Chicago, and Sheboygan, Wisconsin, in the White House Rose Garden speech.

“I will deliver optimism, opportunity, and growth. They will deliver pessimism, stagnation, decline, and very high taxes.

“Simply put, it’s a choice between a socialist nightmare and the American dream.”

Trump said if he wins his reelection battle, he would continue lowering taxes for businesses and families, would seek to reduce U.S. dependence on Chinese manufacturing, and bring jobs back to the United States.

The president has said he wants to cut the top capital gains tax rate to 15 percent from 20 percent. Meanwhile, an analysis of Trump’s campaign plan by the Committee for a Responsible Federal Budget (CRFB), a nonpartisan think tank, found that, under a base case, he could cut taxes by around $1.7 trillion over the next 10 years.

The committee found that Democratic nominee Joe Biden would, under a base case, raise taxes by $4.3 trillion over the next decade. Proposals from Biden, who said he wouldn’t raise individual taxes on those earning under $400,000 per year, are estimated to raise corporate taxes by $1.8 trillion, increase individual taxes by $1.4 trillion, raise the Social Security payroll tax maximum to the tune of $900 billion, establish a “financial risk fee” of $100 billion on big banks, and increase tax revenue by $100 billion by improving tax compliance.

The U.S. Constitution gives Congress the power to raise or lower taxes, so Trump’s and Biden’s economic agendas would be subject to the dynamics of which party controls the House and the Senate.

Trump also said in his remarks Oct. 14, “We will make America into the manufacturing superpower of the world, ending reliance on China once and for all.”

He said he would reward companies that move their jobs to the United States and punish firms that oppose the measure.

“We will keep taxes low for companies that move jobs to America, and we’ll impose steep tariffs on any company that leaves,” he said. “They want to leave? They want to make our product and then sell it back after firing everybody? Not going to happen. They will be tariffed.”

Trump also spoke against the strict lockdowns and restrictions imposed by states amid the CCP (Chinese Communist Party) virus outbreak.

Trump also issued a warning that if he loses the election, then “China will own the United States.”

“China unleashed the virus onto the world, and only a Trump administration will hold them accountable,” he added.