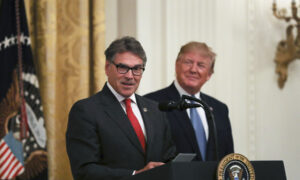 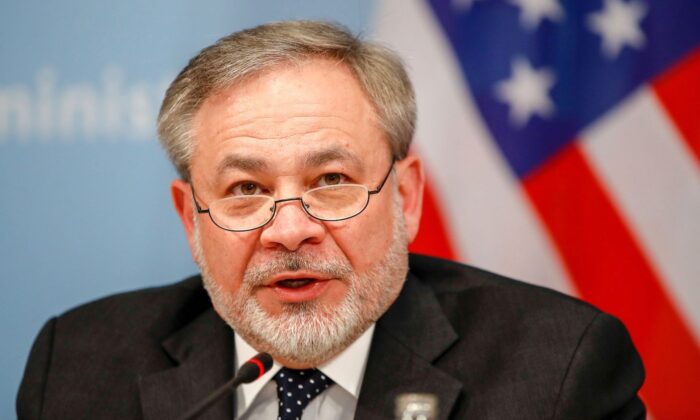 Dan Brouillette speaks during a press conference at the Economy Ministry in Berlin, Germany, on Feb. 12, 2019. (Odd Andersen/AFP via Getty Images)
Politics

The U.S. Department of Energy said on Thursday that if Brouillette is confirmed by the Senate, he will replace Energy Secretary Rick Perry, whom Trump confirmed on Oct. 17 will be departing from the job.

“It has been the opportunity of a lifetime to serve as Secretary of Energy. I have the utmost confidence the Department of Energy will continue to thrive under Dan Brouillette,” Perry said in a statement.

“Dan has faithfully served as my Deputy, helping to advance American energy security and position the United States as the world’s premier energy leader.

“I fully endorse President Trump’s decision to nominate Dan and urge the U.S. Senate to expeditiously confirm him. I look forward to seeing all that the Department accomplishes under his steady leadership as Secretary of Energy.”

It has been the opportunity of a lifetime to serve as Secretary of @Energy. I have the utmost confidence the Department of Energy will continue to thrive under @EnergyDepSec Dan Brouillette. pic.twitter.com/UfoP1kGLGp

Brouillette said in a statement:

“I am honored to be nominated by President Trump to serve as the U.S. Secretary of Energy, and grateful to Secretary Perry for asking me to join him at the Department of Energy over two years ago.

“If confirmed, I will further Secretary Perry’s legacy of promoting energy independence, innovation, and security for the American people.”

According to the Department of Energy, Brouillette, 57, has three decades of experience in both public and private sectors.

Brouillette was vice president at Ford Motor Company from 2004 to 2006. After that, he headed public policy for the United Service Automobile Association (USAA), which offers insurance and financial services to veterans. A native of Louisiana, he was a member of the state’s Mineral and Energy Board from 2013 to 2016.

Brouilette had also served in several roles within the government, including as chief of staff to the U.S. House of Representatives Committee on Energy and Commerce, and assistant secretary of Energy for Congressional and Intergovernmental Affairs.

Brouillette has taken on increasing responsibilities at the energy department in recent months after Perry signaled he would resign, Reuters reported. He went on international trips for the department and sat in for Perry during several cabinet meetings.

Trump had tapped Brouillette for the energy secretary role last month, writing to Twitter on Oct. 18: “I want to thank Secretary of Energy Rick Perry for the outstanding job he has done. He will be leaving at the end of the year to pursue other interests. Rick was a great Governor of Texas and a great Secretary of Energy. He is also my friend!”

“At the same time, I am pleased to nominate Deputy Secretary Dan Brouillette to be the new Secretary of Energy,” Trump wrote. “Dan’s experience in the sector is unparalleled. A total professional, I have no doubt that Dan will do a great job!”