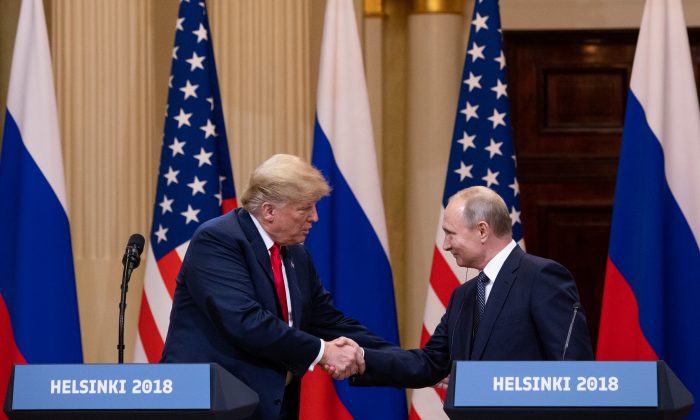 Trump Focuses on Peace Over Politics at Summit With Putin

HELSINKI—The heads of the two nuclear superpowers covered a broad range of issues in a joint press conference that lasted around 45 minutes on July 16.

Both President Donald Trump and Russian President Vladimir Putin heralded the meetings a success and suggested they were long overdue.

Putin said although the two were unable to “clear the backlog” of issues, the leaders made a first important step toward cooperation.

“It’s quite clear to everyone that the bilateral relationship is going through a complicated stage,” Putin said. “And yet those impediments, the current tension, the tense atmosphere, essentially have no solid reason behind it. The Cold War is a thing of the past.”

Trump said the talks were “direct, open, and deeply productive.”

“But our relationship has never been worse than it is now. However, that changed as of about four hours ago,” Trump said. “I would rather take a political risk in pursuit of peace than to risk peace in pursuit of politics.”

Although Putin said he wanted Trump to win the presidency, “because he talked about bringing the U.S.–Russia relationship back to normal” he vehemently denied that Russia interfered in the 2016 U.S. presidential election, saying, “the Russian state has never interfered, and is not going to interfere, into internal American affairs, including the election process.”

The Russian president also said he was willing to work with the United States regarding the 12 Russians who were just indicted for election meddling, although the two countries don’t have an extradition agreement.

Special counsel Robert Mueller, who is investigating the meddling, charged the 12 Russian nationals in an indictment filed on July 13. Mueller charged the Russians with hacking into the emails of the employees of the Clinton campaign, the Democratic Congressional Campaign Committee, and the Democratic National Committee.

Putin said Mueller could send a request for Russia to question the 12 individuals and send the responses back, or Mueller’s team could be present for the questioning in Russia.

“But … this kind of effort should be a mutual one,” Putin said. “We would expect that the Americans would reciprocate and they would question officials, including the officers of law enforcement and intelligence services of the United States whom we believe have something do do with illegal actions on the territory of Russia.”

Putin indicated he would like to question people surrounding Bill Browder, the CEO and co-founder of Hermitage Capital Management, whom Putin said earned money illegally and sent $400 million to Hillary Clinton’s presidential campaign.

Browder successfully lobbied the U.S. Congress to pass the Magnitsky Act. Named after Browder’s Russian accountant who died in a Moscow prison after exposing corruption, the act enables the United States to sanction officials in other countries guilty of human rights violations.

National Security Adviser John Bolton said on ABC News’ “This Week” on July 15 that he found it “hard to believe” that Putin would not know about the hacking, given that the people charged are all allegedly part of Russia’s military intelligence.

After the press conference, while in the air traveling back to the United States, Trump posted a Tweet to clarify his stance.

“As I said today and many times before, ‘I have GREAT confidence in MY intelligence people,’” he wrote. “However, I also recognize that in order to build a brighter future, we cannot exclusively focus on the past—as the world’s two largest nuclear powers, we must get along!”

A reporter questioned Trump about a tweet he posted earlier in the day that said, “Our relationship with Russia has NEVER been worse thanks to many years of U.S. foolishness and stupidity and now, the Rigged Witch Hunt!”

The reporter asked Trump if he holds Russia responsible for anything regarding the election.

“Yes I do. I hold both countries responsible,” Trump said. “I think that the United States has been foolish. I think we’ve all been foolish—we should have had this dialogue a long time ago, a long time frankly before I got to office.

And I think we’re all to blame.”

Trump said the Mueller probe is a “disaster” for the United States.

Trump looked to the future and said he thinks the United States and Russia “have a chance to do some great things,” including stopping nuclear proliferation.

Possibly the biggest area in which the two countries could cooperate to effect change is the Syrian crisis.

Both leaders expressed their will to do so, even though Putin has supported the Assad regime.

Putin suggested the United States and Russia “assume leadership” in the Syrian crisis “and organize the interaction to overcome humanitarian crisis and help Syrian refugees to go back to their homes.”

He pledged to make steps toward “a lasting peace” in the region.

Trump said the crisis in Syria is complex but cooperation between the United States and Russia has the potential to save hundreds of thousands of lives.

Putin agreed to disagree on Crimea, saying Trump has made his position clear, but his viewpoint is different.

“We held a referendum in strict compliance with the UN Charter and the international legislation,” Putin said. “For us, we’ve put paid to this issue.”

Trump has said he would not have allowed Russia to annex Crimea had he been president in 2014. But, he places more blame on former President Obama for the annexation than on Putin.

“Crimea was TAKEN by Russia during the Obama Administration. Was Obama too soft on Russia?” Trump wrote on Twitter on Feb. 15, 2017.

Trump and Putin spent about two hours in a one-on-one meeting earlier in the day.