Trump Focused on Nukes, but May Bring up Human Rights to North Korea 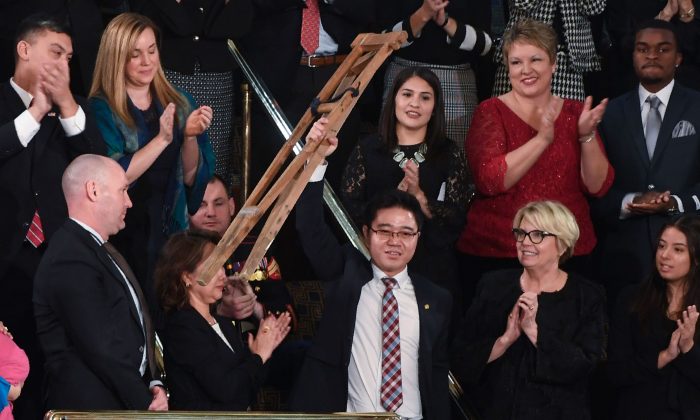 SINGAPORE—President Donald Trump hasn’t been shy when it comes to human rights in North Korea; he has even hinted he will bring up the topic at the summit with Kim Jong Un on June 12.

Before departing the G7 meeting in Canada, Trump was asked by reporters whether he was going to raise the issue of gulags with Kim Jong Un.

“We’re going to raise every issue,” Trump responded. “Every issue is going to be raised.”

Olivia Enos, a policy analyst in the Asian Studies Center at the Heritage Foundation, said the president would be “incredibly smart” to raise human rights at the summit.

“It’s already a historic summit because it’s the first time a sitting U.S. president has met with a North Korean leader … but it would be even more historic to bring up the human rights issues,” Enos said on June 11, a day before the summit.

Enos said between 80,000 and 120,000 North Koreans are languishing in dozens of prisons in the country.

“In those prison camps, you have individuals subjected to forced labor for many hours every single day,” Enos said. “You have women who are raped by individuals in the camps and then are forced to abort their children. You have individuals who, three generations of their family were sent to these political prison camps simply because maybe someone was reading a bible, or they watched a South Korean drama, or their grandparents did something that the regime saw as not politically legitimate.”

She said conservative estimates suggest that more than 400,000 North Koreans have died in the nation’s prison camps over the years.

Trump has used multiple platforms to bring North Korean human rights to the fore; one of the most dramatic was his State of the Union address earlier this year.

The president relayed the story of Ji Seong Ho, a North Korean defector who was starved and tortured before escaping. As Trump introduced him, Ji hoisted his crutches in the air to resounding applause.

“Seong Ho’s story is a testament to the yearning of every human soul to live in freedom,” Trump said.

On the same night, Trump paid tribute to Otto Warmbier by inviting his family to attend the speech.

Warmbier died in June last year, just days after North Korean regime sent him home in a coma after holding him for 17 months.

“After a shameful trial, the dictatorship sentenced Otto to 15 years of hard labor, before returning him to America last June, horribly injured and on the verge of death,” Trump said.

Trump turned and spoke to Warmbier’s emotional parents, Fred and Cindy Warmbier, and his brother and sister, Austin and Greta.

“You are powerful witnesses to a menace that threatens our world, and your strength inspires us all. Tonight, we pledge to honor Otto’s memory with American resolve.”

Trump has talked about the depraved nature of the North Korean regime on several other occasions, including in an address at the U.N. General Assembly in 2017.

“No one has shown more contempt for other nations and for the well-being of their own people than the depraved regime in North Korea,” he said. “It is responsible for the starvation deaths of millions of North Koreans, and for the imprisonment, torture, killing, and oppression of countless more.”

And again during a speech to South Korea’s National Assembly in November last year.

“The horror of life in North Korea is so complete that citizens pay bribes to government officials to have themselves exported abroad as slaves. They would rather be slaves than live in North Korea,” Trump said.

“And so, on this peninsula, we have watched the results of a tragic experiment in a laboratory of history. It is a tale of one people, but two Koreas. One Korea in which the people took control of their lives and their country, and chose a future of freedom and justice, of civilization, and incredible achievement. And another Korea in which leaders imprison their people under the banner of tyranny, fascism, and oppression. The result of this experiment are in, and they are totally conclusive.”

As the summit has neared, Trump has toned down his rhetoric; at the same time, North Korea has expressed a willingness to comply with the U.S. demands of complete denuclearization.

Trump is going into the summit with the intent to forge a relationship with Kim and build from there.

“The minimum would be relationship. You’d start at least a dialogue. Because, you know, as a deal person, I’ve done very well with deals. What you want to do is start that,” Trump told reporters on June 9 before departing Canada for Singapore. “Now, I’d like to accomplish more than that. But at a minimum, I do believe, at least we’ll have met each other. We will have seen each other. Hopefully, we will have liked each other, and we’ll start that process.”

“I think one thing that’s really interesting [is that] this time around, Kim Jong Un has been sensitive to criticism on human rights issues,” she said.

Secretary of State Mike Pompeo said he brought up human rights when he met with Kim and that human rights “will be part of the discussions as we move forward.”

Pompeo made the comment to the House Foreign Affairs Committee on May 23, after he was asked whether human rights could be part of a denuclearization deal with Pyongyang.

Enos said the summit is the beginning of a process that will hopefully include denuclearization and the dismantlement of the prison camp system in North Korea.

“So we have to temper expectations for the summit.”