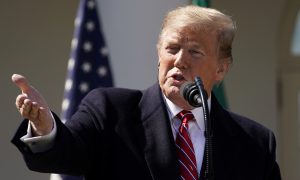 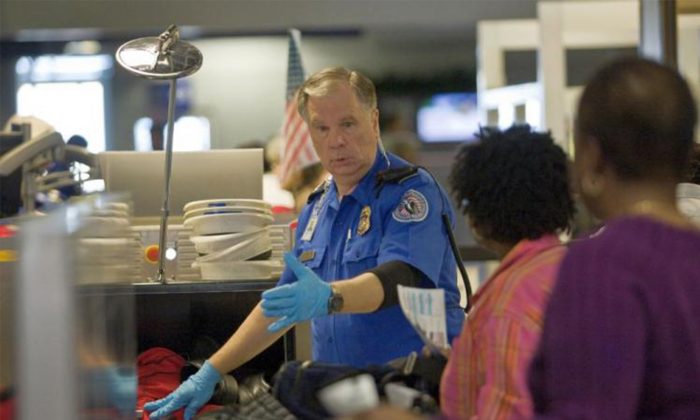 President Donald Trump flagged a video on Twitter on March 19 of a boy being excessively patted down by an airport security agent.

“Not a good situation,” Trump wrote.

Comedians Daniel Whitney and James Woods shared the video early on the morning of March 19. The video was originally uploaded to Twitter by author Jeremy Stone, who uses the Twitter handle “Deep State Exposed.”

“Absolutely ridiculous!” Whitney wrote alongside the video. “How many times do you have to feel a kid up to figure out he’s not a threat? This is infuriating and hard to watch.”

Not a good situation! https://t.co/uaMcSrX4yM

The video first appeared online in early 2017. The boy in the video, Aaron Williamson, was 13 years old at the time of the incident, according to his mother, Jennifer Williamson. The mother relayed the story to a local AM radio station based in Utica, New York.

The mother and son were traveling from Texas to San Diego when Aaron was pulled aside for the pat down.

“We were told in no uncertain terms that either we comply immediately without question or we be escorted from the airport,” Williamson told WIBX 950 AM in March of 2017.

Williamson said she was disturbed by how invasive the search was, noting that the agent appeared to have looked down the boy’s pants.

“I was appalled at how many times this man went over my son and how the back of his waistband was opened, his shirt was pulled up the back,” Williamson said. “You can see it appears the agent is looking down the back of his [her son’s] pants.”

Williamson posted the video of the pat down on Facebook. It instantly went viral in 2017, with more than 100,000 people sharing the clip and 67,000 leaving comments. Many of the commenters found the patdown excessive.

Aaron has sensory processing disorder, a condition in which the brain has trouble receiving and responding to sensory information. After the incident, the boy kept asking his mother “What did I do wrong?”

The mother told “First News With Keeler” that the Transportation Security Administration later reached out to her and asked if she would like to join a special program meant to improve how its agents deal with people with disabilities.

“They have asked if I would be willing to join their Disabilities and Medical Condition Coalition. This will provide me with the opportunity to engage in regular dialogue to influence and inform the TSA on minor modifications that may help certain passengers,” Williamson said.

Aaron has had to deal with bullies, according to his mom.

“He already has experienced bullying for being a ballet dancer and advocates for that so he is really a unique and thoughtful kid,” Williamson said.

Not all of the commenters on the original Facebook video sided with Williamson. Some wrote she was “blowing the incident out of proportion,” according to WIBX 950.

“I know there have been a smaller group of people who question the motives of my going public with the video but my intention has always been to initiate change,” Williamson said.

“We were treated with utter disrespect as if we were criminals,” Williamson told CBS in March 2017.

“I believe he was patted down excessively. They went over his sensitive areas, a little more than necessary, especially given that he wasn’t wearing bulky clothing or anything like that,” Williamson said.

The incident started after TSA found a laptop in Aaron’s bag when it went through a scanner. The agents then said the boy would have to go through a pat down even though he did not set off the metal detector after walking through it. Williamson suggested her son be screened another way because of his disorder.

The TSA said at the time that the agents followed approved procedures. The agency said the family was detained for a total of 45 minutes, which included the discussion with the mother and the screening of an additional three pieces of luggage.