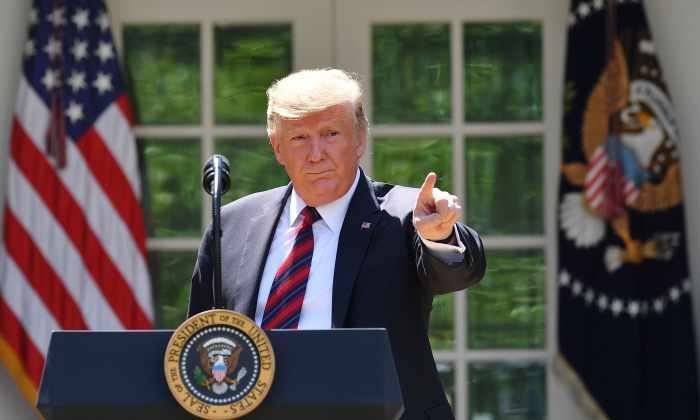 President Donald Trump at the Rose Garden of the White House in Washington on May 16, 2019. (Mandel Ngan/AFP/Getty Images)
Trump Administration

U.S. District Judge Amit Mehta, an appointee of President Barack Obama, ruled in favor of the House Committee on Oversight and Government Reform on May 20 and gave Mazars LLP seven days to comply with the committee’s subpoena.

Mehta also denied a request by Trump’s attorneys to stay the decision pending an appeal. The ruling marked the first time a federal court has remarked on how far House Democrats can go to probe Trump’s business affairs.

Trump told reporters the decision was “crazy” and that it would be appealed.

On May 14, Mehta heard oral arguments on whether Mazars LLP must comply with the subpoena.

Trump’s lawyers argued that the subpoena didn’t have a valid legislative function and that the Democrats are on a quest to “turn up something” they “can use as a political tool against the president now and in the 2020 election.”

“They have made clear that this is not about legislation. They want to know if there has been any wrongdoing,” the president’s attorney William Consovoy said. “That is not the purpose of Congress.”

Douglas Letter, a lawyer for the House committee, argued that the subpoena fell within the authority of Congress. Mehta appeared to side with Letter’s argument.

“We have an obviously legitimate purpose,” Letter said. “Congress obviously serves an extremely important informative function for the American people.”

In his ruling, Mehta said the committee “has shown that it is not engaged in a pure fishing expedition for the President’s financial records.” The documents sought by the committee assist Congress in passing laws and performing other core functions, the judge said.

“It is simply not fathomable that a Constitution that grants Congress the power to remove a President for reasons including criminal behavior would deny Congress the power to investigate him for unlawful conduct–past or present–even without formally opening an impeachment inquiry,” Mehta said.

Trump views various Democrat-led inquiries as an effort to impede his work. Democrats started investigating the president after gaining control of the House of Representatives in the 2018 midterm election. The number and intensity of the investigations ramped up greatly after special counsel Robert Mueller concluded that Trump didn’t collude with Russia.

On May 20, the White House told former White House counsel Don McGahn to defy a subpoena to testify about Mueller’s probe before a different congressional committee. Trump has also asserted executive privilege over the redacted portions of the special counsel report in response to another subpoena.

The oversight committee claims that it needs Trump’s financial records to examine whether he has conflicts of interest or broke the law by not disentangling himself from his business holdings.

Mazars has avoided taking sides in the dispute and said it will “comply with all legal obligations.”

A judge in Manhattan is scheduled to hear arguments May 22 in a similar lawsuit Trump filed to block subpoenas issued to Deutsche Bank AG and Capital One Financial Corp.

The effort to obtain Trump’s financial records was one of three investigations launched by Democrats on three key House committees on April 3. The other probes are seeking the commander-in-chief’s tax returns and the unredacted Mueller report. The number of inquiries led by House Democrats has since grown to 10.

The White House is refusing to comply with the Democrats on most fronts. Treasury Secretary Stephen Mnuchin defied a House Ways and Means Committee subpoena for Trump’s tax returns. The White House, at the request from Barr, asserted executive privilege over the redacted material in the Mueller report.

Democrats have responded by threatening and acting on threats to hold officials in contempt and asking the courts to intervene.