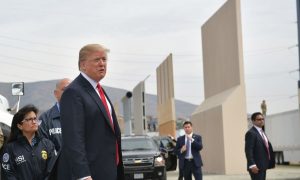 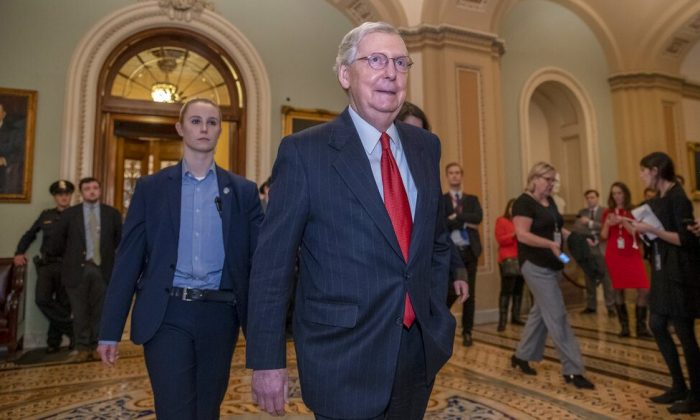 President Donald Trump says he’s “just honored” that almost all Senate Republicans voted for his proposal to trade funding for a U.S.-Mexico border wall for temporary protections for some immigrants, even though the Senate rejected the bill.

The bill was one of two measures designed to end the partial government shutdown that failed in the Senate on Jan. 24. The second bill was supported by Democrats who want to re-open shuttered agencies without the wall funding.

Fifty of 53 Senate Republicans voted for the Trump proposal.

Speaking at the White House, Trump said, “I just really want to thank the Republicans for holding.” He added that he was “just honored that almost all of the Republicans voted for our bill.”

Trump also praised Sen. Joe Manchin of West Virginia who was the only Democratic senator to vote for Trump’s plan.

Partisan differences have scuttled attempts by both Senate Democrats and Republicans to temporarily reopen the shuttered sectors of the federal government.

The measure would have reopened agency doors through Feb. 8.

Trump is refusing to reopen the government until he gets a deal on funding for his long-sought border wall.

The Democratic measure had already passed the House but fell short Jan. 24 of the 60 votes required in the Senate to defeat the GOP’s competing measure as the marathon filibuster on funding for the border wall continues.

The partial government shutdown is now in its 34th day. Federal workers will be missing another paycheck on Jan. 25.

No Short-Term Deal Unless it Involves ‘Large Down Payment’

The statement from White House spokeswoman Sarah Huckabee Sanders said on on Jan. 24 that President Donald Trump will not accept a short-term deal to reopen the government unless it includes “a large down payment” for his promised border wall.

Earlier Jan. 24, the Senate rejected competing Democratic and Republican proposals for ending the 34-day partial government shutdown, which is the longest in the nation’s history.

Sanders said at the time that Senate Republican leader Mitch McConnell and Senate Democratic leader Chuck Schumer are trying to see “whether or not they can work out of the deadlock.”

House Speaker Nancy Pelosi is rejecting the idea of providing a “big down payment” for President Donald Trump’s border wall as part of a solution to the partial government shutdown.

Pelosi on Jan. 24 spoke after Trump suggested a “reasonable” installment on such a barrier might be a way to solve the impasse. She suggested the idea was not a serious one.

Asked whether she knows the size of a down payment that Trump might find reasonable, Pelosi replied, “I don’t know if he knows what he’s talking about.”