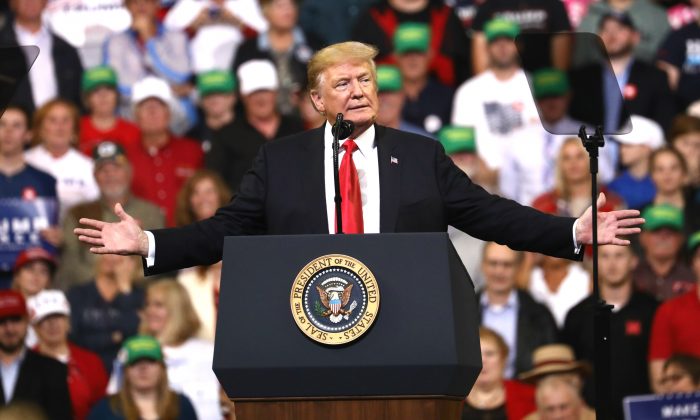 President Donald Trump is doubling down on his criticism of the Federal Reserve, saying that the central bank poses the greatest risk to the U.S. economy.

The president blamed Fed Chairman Jerome Powell for continuing to raise interest rates. In an interview with The Wall Street Journal on Oct. 23, Trump acknowledged Powell’s independence, but said he would prefer the Fed to keep interest rates lower so the United States can begin paying off debt.

“Every time we do something great, he raises the interest rates,” Trump said. “He was supposed to be a low-interest-rate guy. It’s turned out that he’s not.”

The Fed maintained the lowest interest rates in history during most of the eight years that President Barack Obama was in office. Since Trump was inaugurated, the central bank has raised rates seven times, most recently in September.

The Fed plans one more rate increase this year, three in 2019, and one more in 2020. The central bank currently expects to continue raising rates until its benchmark overnight lending rate is around 3.40 percent in 2020, explaining that the planned hikes will restrain a booming economy, toward preventing inflation and financial bubbles.

The prevention of financial bubbles, or the so-called boom and bust cycle, was the key rationale for creating the Fed. But the institution, along with the fractional reserve banking system, has not only repeatedly failed at that mission, but created the very booms and busts it was established to prevent. Federal Reserve rate-increase sprees led to the Great Depression in 1928, the dot-com crash in 2000, and the Great Recession in 2008.

Some officials within the Fed have already signaled that they don’t agree with the current course.

On Oct. 17, St. Louis Fed President James Bullard said the bank’s current monetary policy path would raise the risks of recession in an economy where recent, unexpectedly strong growth may start to taper anyway. Bullard is set to join the Fed’s rate-setting committee in 2019.

Many economists view the current growth of about 3 percent and unemployment of 3.7 percent, which is near a 50-year low, as unsustainable and likely to lead to higher inflation. The continued “gradual” rate increases are regarded as insurance against that possibility.

But Bullard has taken a different tack, arguing that the Fed rate increases over roughly the past two years have only been possible because the economy outperformed the central bank’s outlook.

“The economy keeps surprising to the upside. … It has rationalized the [Fed’s] path,” Bullard said.

Trump has criticized the Fed repeatedly for raising rates. On Oct. 17, the president called the Fed “my biggest threat” and had earlier called the bank “crazy” and “ridiculous.”

“To me, the Fed is the biggest risk because I think interest rates are being raised too quickly,” the president said.

Asked if he would have picked someone other than Powell, in retrospect, Trump said that it’s “too early to say, but maybe.” The president said he hasn’t spoken to Powell directly “because, in theory, he’s supposed to be independent. But I’m not happy with what he’s doing at all.”

“I would like to have interest rates low and I’d like to pay off debt. But you can’t pay off debt when he keeps raising the rates,” Trump said.

The Fed’s next meeting is scheduled for November with the next rate increase expected in December.