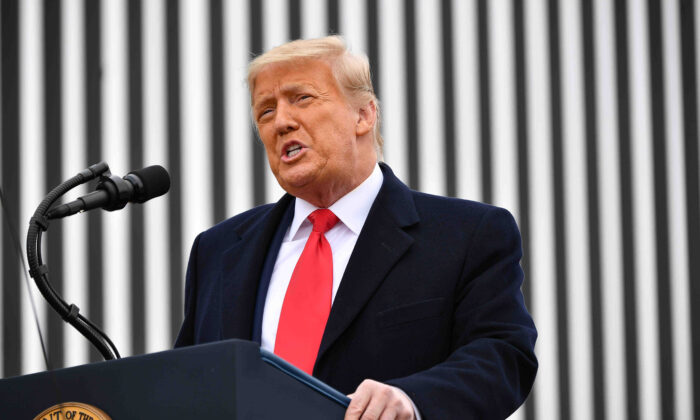 President Donald Trump extended the national border emergency until February 2022 as a number of Central American migrants appear to be heading to the U.S.–Mexico border area via caravans.

Trump said in an announcement on Jan. 16, “The ongoing border security and humanitarian crisis at the southern border of the United States continues to threaten our national security, including by exacerbating the effect of the pandemic caused by COVID-19 … but further action is needed to address the humanitarian crisis and to control unlawful migration and the flow of narcotics and criminals across the southern border of the United States.”

The extension continues the emergency that Trump declared in February 2019 to overcome opposition to the construction of the border wall and immigration reforms.

Making note of that declaration, Trump said that the emergency “must continue in effect beyond February 15, 2021,” adding, “I am continuing for 1 year the national emergency declared in Proclamation 9844 concerning the southern border of the United States.”

In 2015 and 2016, Trump campaigned on building a wall along the U.S.–Mexico border. His administration, so far, has constructed more than 450 miles’ worth.

On Jan. 18, as many as 9,000 Honduran migrants headed toward the U.S. border called on President-elect Joe Biden to honor his “commitments” to asylum-seekers and migrants. Biden in January said he would “eliminate President Trump’s decision to limit asylum and end the” program that sees asylum-seekers remain in Mexico while waiting for their claims to be adjudicated.

Video footage and photos show a caravan from Honduras breaking through the Guatemala border en route to the United States.

“Joe Biden promised amnesty throughout his campaign. A surge of migrants headed to our border is entirely predictable, and it’s a public health catastrophe,” said Sen. Tom Cotton (R-Ark.), making note of fears that the migrants could spread COVID-19.

The senator’s warnings were echoed by Customs and Border Protection chief Mark Morgan, who wrote on Twitter Jan. 16: “While a migrant caravan attempts to reach Mexico & the US led by irresponsible coordinators, our countries have had a combined 25 million COVID-19 cases & 500,000 deaths—and infections are surging! COVID is a silent killer & the number of migrants falling ill will only increase.”

Meanwhile, on Jan. 18, an anonymous Biden transition official told news outlets that the migrants should stay put. Those migrants, according to the anonymous source, “need to understand they’re not going to be able to come into the United States immediately” and added that now “is not the time to make the journey.”

Biden’s transition team didn’t immediately respond to a request by The Epoch Times for comment.