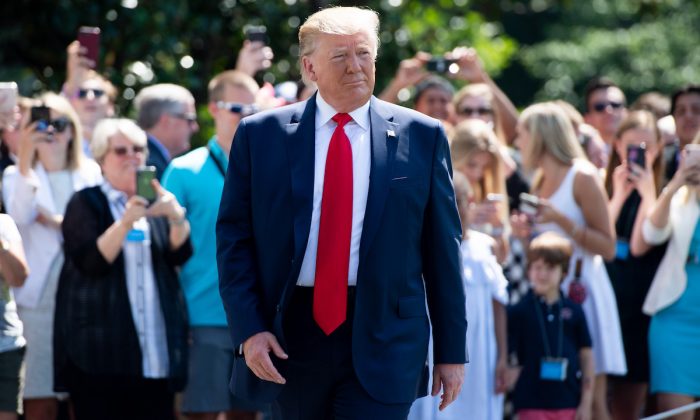 US President Donald Trump walks to speak to the media prior to departing on Marine One from the South Lawn of the White House in Washington, DC, July 5, 2019. (Saul Loeb/AFP/Getty Images)
Trump Administration

President Donald Trump said that it’s crucial to have the citizenship question on the 2020 Census for a range of issues.

The president said earlier Friday that he was mulling an executive order that places the question on the census.

Trump said that he spoke with Attorney General William Barr on Friday about the situation.

“And by the way, if you look at the history of our country, it’s almost always been asked. So we’re fighting very hard against the system, that’s a very difficult system but we’ll make a decision. The attorney general is working on that right now.”

Trump said that an executive order is one of four or five options that are on the table, also saying his administration could print the census now without the question and add it on later.

Trump has focused intensely on the issue this week, repeatedly giving updates on the situation. He said that he told government workers to “do whatever is necessary” to get the question on the census, while Department of Justice lawyers indicated they were looking at possible “legally available” paths forward in a conference call with a federal judge on Wednesday.

Lawyers told the judge that the administration was not giving up the fight to add the question to the census, according to a court filing in Maryland. “[I]f a viable path forward is found, DOJ’s current plan would be to file a motion in the Supreme Court to request instructions on remand to govern further proceedings,” the filing stated.

After the Trump administration announced it wanted the question placed back on the census—it was on for centuries until the 1950s—legal groups challenged the plan, claiming it would lead to illegal immigrants declining to respond to the once-in-a-decade census.

Some have said the ruling leaves room for Trump to print the census now with the question on it.

“Completely. Print the census with the question—and issue a statement explaining why—’because we should.’ Done,” Rep. Chip Roy (R-Texas) said.

“Neither the Constitution nor the Roberts opinion say the question cannot be included,” he added. “The President can add it & SCOTUS didn’t say otherwise—just that it wanted a better rationale than Commerce gave… so POTUS ought to do that.”

One former judge said Trump had the authority to place the question on the census through an executive order.

Steven Schier, a professor of political science at Carleton College in Minnesota, told KTSP that he thinks Trump’s chances of getting the question on the census are around 50/50.

“This has been a central theme of the Trump presidency and the Trump campaign in 2016. It was all about citizenship and immigration. He does not want to let this issue go,” Schier said.