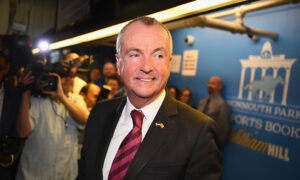 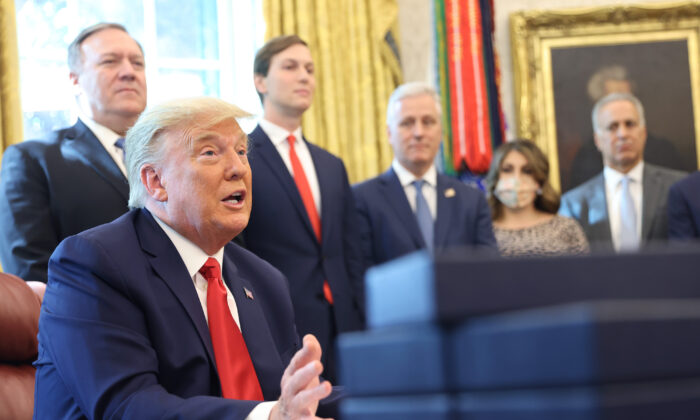 President Donald Trump said on Oct. 23 that he expects Saudi Arabia will be among “at least five” Arab nations soon to normalize diplomatic relations with Israel.

Trump made the remarks to reporters in the Oval Office after an announcement that Sudan had agreed to restore diplomatic ties with Israel.

“We have at least five that want to come in. And we’ll have many more than that very soon,” Trump said.

“I’m sure you’ll see Saudi Arabia there very soon,” Trump said. “I really believe that will happen too, and very good relations with Saudi Arabia, and so you’ll see something very special.”

The Oct. 23 normalization deal is the third U.S.-brokered agreement between Israel and an Arab state in recent months. Similar agreements have been reached with Bahrain and the United Arab Emirates.

“Today’s peace agreement will enhance Israel’s security and end Sudan’s long isolation from the world because of what was taking place,” Trump said. “It will unlock new opportunities for trade and commerce, education and research, and cooperation and friendship for both peoples.”

Asked to detail the implications of a “normalization” deal, Netanyahu called it “mind-boggling” and spoke of container ships carrying consumer goods following newly established trade lines between the United Arab Emirates and Israel.

“That’s bringing down the price—the cost of living for the citizens of Israel right away. So it’s—firstly, it’s trade,” Netanyahu said, adding that Israeli tourism agents have been “flocking to Abu Dhabi and Bahrain, and they’re now just loaded with requests from Israelis and, believe it or not, the other way around: Bahrainis and Emiratis who want to come to Israel.”

“You have trade, tourism, technology, entrepreneurs, everything,” the Israeli prime minister said. “I mean, the same thing is going to happen with Sudan.”

A reporter asked about the sale of F-35s to the United Arab Emirates, which Abu Dhabi had been seeking for some time, prompting Trump to say, “That process is moving along.”

Also on Oct. 23, Israel announced that it wouldn’t oppose U.S. sales of “specific weapons systems” to the United Arab Emirates, which didn’t explicitly refer to F-35s.

“Since the U.S. is upgrading Israel’s military capability and is maintaining Israel’s qualitative military edge, Israel will not oppose the sale of these systems to the UAE,” the joint statement said.

“We’ve never had a dispute with UAE; they’ve always been on our side. And that process is moving along—I think hopefully rapidly,” Trump said, responding to the question about the United Arab Emirates’ bid to acquire the fighter jets.