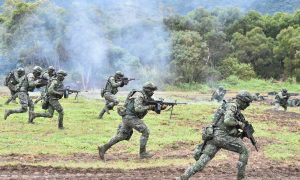 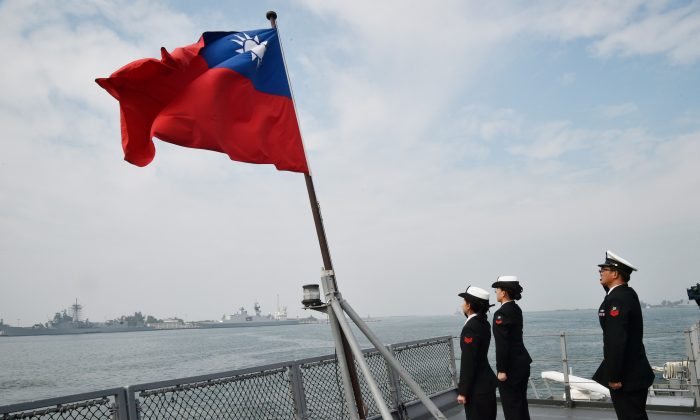 Taiwanese sailors salute the nation’s flag on the deck of the Panshih supply ship at the Tsoying naval base in Kaohsiung on Jan. 31, 2018. (Mandy Cheng/AFP/Getty Images)
Trump Administration

Despite the People’s Republic of China’s (PRC) insistence that the United States must not recognize nor support Taiwan’s statehood, the U.S. Congress has thrown its support behind the island nation, as both houses unanimously passed a bill that would pave the way for more official exchanges with Taiwan. While Beijing has vehemently criticized the bill’s passage, President Donald Trump is expected soon to sign the bill, which many see as an indication of U.S.–Taiwan relations strengthening in the face of the Chinese regime’s intimidation.

The bill, titled “Taiwan Travel Act,” was introduced by Rep. Steve Chabot (R-Ohio) in 2017 and cleared the House in January of this year without opposition. On Feb. 28, it then passed the Senate also by unanimous consent.

According to reports, Trump is expected to sign the bill into law in the coming days, although it has set off an internal debate between White House advisers who favor a conciliatory approach to China versus those who advocate a tougher stance. The fact that the bill was passed unanimously by both Houses, however, could make it politically difficult for Trump to veto the bill even if he wishes to.

Observers are debating the significance of the bill, which some see as mostly of symbolic value, while others say it could indeed upgrade the status of U.S.–Taiwan relations.

On the surface, the Taiwan Travel Act stipulates that the United States should allow “officials at all levels” of the U.S. government, including cabinet officials and senior military officers, to travel to Taiwan and meet with their Taiwanese counterparts. It also allows Taiwanese high-level officials to visit the United States and engage with U.S. officials, although it does not specify what specific level of officials it desires to authorize.

The Chinese regime has clearly expressed its displeasure with the bill. On March 1, Foreign Ministry spokeswoman Hua Chunying said, “[it] severely violated the one-China principle and the stipulations of the three joint communiqués between China and the US.” An Fengshan, a spokesman for the Chinese regime’s Taiwan Affairs Office, unleashed threats against Taiwan and said, “We sternly warn Taiwan not to rely on foreigners to build you up, or it will only draw fire against yourself.”

None of the three joint communiqués declared during the 1970s and 1980s during the height of the Cold War were ever approved by the U.S. Congress. For decades, however, the U.S. State Department has observed unwritten rules that limit or at least discourage high-level official exchanges with Taiwan, to which the United States does not extend official diplomatic recognition.

“Nothing in U.S. or international law currently prevents U.S. officials from meeting with Taiwanese government officials,” writes Julian Ku, a constitutional law professor at the Hofstra University School of Law, in his blog. “But the U.S. government avoids such meetings out of deference to China—considering the Chinese perspective that such meetings would contradict U.S. recognition of the PRC as the sole legitimate government of China.”

Bonnie Glaser, senior adviser for Asia and director of the China Power Project at the Center for Strategic and International Studies (CSIS), said during a CSIS panel on March 1 that if signed into law, the Taiwan Travel Act will indeed help loosen unwritten restrictions over high-level official exchanges between Taiwan and the United States. She also noted that the bill is not a binding one over the U.S. executive branch, as it only expresses the “sense of Congress.”

Taiwan has welcomed the passage of the bill, with Taiwan’s Ministry of Foreign Affairs stating that Taiwan would develop an even more substantial cooperative relationship with the United States, while Taiwanese President Tsai Ing-wen tweeted that the act “symbolizes the US Congress’s longstanding support for Taiwan.”

It is unclear whether the bill’s support for high-level official visits extends to the highest levels, such as the presidents from both sides. In the past, Taiwanese presidents, including the incumbent Tsai Ing-wen, have paid numerous visits to the United States, with each visit limited to no more than 1–2 days in accordance with unwritten restrictions observed by the U.S. State Department.

“The United States is the leader of the world, while Taiwan is a sovereign country. The United States should not have to worry about China’s opinion with regards to its relationship with Taiwan,” said Taiwan Premier Lai Ching‑te to Taiwanese legislators on March 2. “The U.S. Congress represents the will of the American people, and the passage [of the Taiwan Travel Act], awaiting to be signed into law by U.S. President Trump, is great news for us.”

On Feb. 28, China announced a massive economic “gift package” designed to lure Taiwanese businesses and individuals to come to the mainland. The announcement, which coincided with the passage of the Taiwan Travel Act in the U.S. Senate, was seen by observers as an example of Beijing’s “soft-hard” approach to subjugate Taiwan.

Unlike the passage of the U.S. bill, however, the “gift package” from China received little enthusiasm from the Taiwanese public, many of whom point to China’s continuing military buildup and aggressive posture against Taiwan.

Trump has previously shown strong support for Taiwan. Before he was inaugurated, on Dec. 2, Trump accepted a phone call from Taiwan President Tsai. This was the first time the leaders of the United States and Taiwan had spoken directly to one another since 1979 when the United States switched its diplomatic recognition from Taiwan to the PRC.

In June 2017, the Trump administration announced a $1.42 billion arms sale to Taiwan, which drew angry reactions from the PRC.

The arms sale, and the passage of the Taiwan Travel Act, are signs of increasingly hardening U.S. attitudes toward the Chinese regime.

In August, the Trump administration initiated a Section 302 investigation into China’s theft of U.S. intellectual property, which may result in sanctions against China, and the recently proposed tariffs on steel and aluminum are thought to be aimed partly at China.

Among other efforts to contain China, the Trump administration has met with officials from Australia, India, and Japan to discuss forming an alliance of the four “like-minded” democracies—known as the Quadrilateral Security Dialogue, or “Quad.”