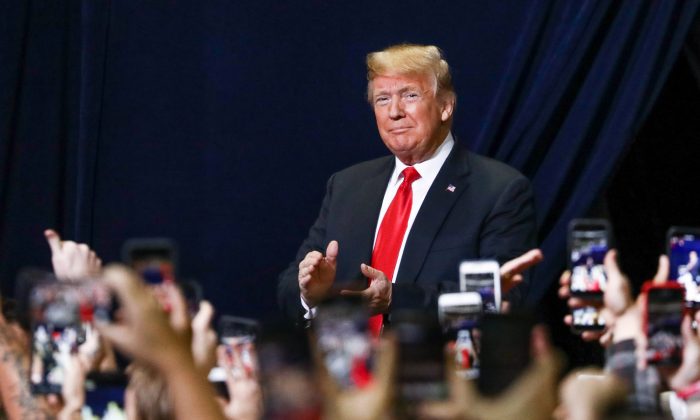 President Donald Trump has been a huge surprise, even to somebody who voted for him as enthusiastically as I did.

In his first two years, he’s had more success than the two prior presidents combined—meaning success that has clearly bettered the America he heads as president. That is what defines his first years in office. He is a consequential president—consequential in the most positive of ways—which is why his supporters love him.

We haven’t seen two such successful years since the Reagan administration, and frankly, even he didn’t do as well during his first two years. While he succeeded in passing his famous tax cuts in August of his first year, the country entered a recession in 1982. Even so, the positive effects of his tax policy would be felt in 1983 and afterward.

Trump’s economic success came virtually as he was assuming office. Companies began to return offshore earnings immediately, manufacturing began to return, and wages and jobs began to increase relatively quickly. Trump’s success actually helped average Americans, unlike the fake promises of Obama. There are plenty of articles that point to his successes. There are also plenty of articles that point out the reality of his new slogan: Promises made, promises kept.

The most important fact about his presidency is that Trump’s first two years have exceeded expectations. His quip that people will finally say to him that they’re tired of winning has almost come true. Of his list of 200-plus promises kept, let me outline the most positive of his successes. These are the things that will define him:

• The economy has turned from anemic, to extraordinary, by all measures.

• The optimism of the average American is higher than in decades, maybe ever.

• ISIS has virtually been vanquished, a feat not considered possible. Yet, it was done relatively quickly.

• For the first time in a long time, we are feared by our enemies abroad, and respected by our allies.

• He is remaking the judiciary: appointing conservative judges, along with two conservative Supreme Court justices. This is ongoing, and revolutionary.

• For the first time since Reagan, we have a president who is an advocate for America’s success.

• For the first time since Reagan, we have an advocate for the American Dream.

• For the first time since Reagan, we have a leader who is fighting and beating back the destructive Left.

There is a promise recorded in the Book of Jeremiah: “For I know the plans I have for you, declares the Lord, plans to prosper you and not to harm you, plans to give you hope and a future.”

I am going to suggest something. We are in a time where we have been given extraordinary hopes and see wonderful plans for the future. In two years—two short years—optimism is Trump’s defining accomplishment. We are once again a nation that is defined by it. And that is a gift from God to us all.

Doubly amazing is that all these great things have been accomplished in spite of 24/7 efforts by the Left to demonize and delegitimize Trump. There are many in this country who can’t see reality. Instead, they want to believe Trump is the reincarnation of Hitler. Too many on the Left mindlessly repeat that phrase.

Yet in spite of the scorched-earth campaign to destroy him, things have gotten better for America. Incredibly, even MSNBC is doing better.

A digression: I have no illusions about Trump’s flaws. I understand why some might be upset with him for fighting back the way he does, or dislike his demeanor. While I sympathize, I have no patience for those who elevate a few personal, overblown shortcomings instead of his accomplishments. To those who are upset, remember two things: First, there has been a massive campaign to destroy Trump 24/7 by the hard-left for more than two years. What they have convinced many about his faults is more due to that propaganda campaign than any reality.

Second, he has made this country step forward positively. We have benefited as individuals. He has helped all of us with the freedom to better our situation, and the capacity to succeed in our life goals. This second fact is what counts. And that should totally outweigh any small gnats, real or imagined, in Trump’s character.

As I was saying, we are once again a nation of optimists, because there are things to be optimistic about again. That is true hope, an extraordinary change, and we are experiencing it in real time.

And yet, the Left wants to destroy him and his family. They want to destroy anyone in their way back to power. They see him as the obstacle to them holding power. They see him as the bulwark that needs removal. If they succeed in destroying him, their goals can be realized. Power. Riches. Adulation. Authority. Make no mistake, Trump didn’t start this fight, nor the problems inherited. Thankfully, he appears strong enough to win against the unhinged Left.

He isn’t the divisive one, he simply lives in a time where the Left needs mayhem, so they attack him. They need to ruin him. Using Saul Alinsky’s Rule 13, they want to freeze him, personalize (destroy) him and his family, and polarize everything he does.

While at a rally for Senate candidate Josh Hawley in Missouri last November, radio host Rush Limbaugh gave a 10-minute introduction to Trump. Limbaugh said something profound: “Donald Trump wants America to be great again—and, it’s not a slogan, it is an objective.”

For all of Trump’s bombast, and for all his supposed ego trips, when you boil everything down, that’s what he wants: to make America a great place, to allow as many Americans as possible to utilize their gifts to the best of their abilities. He believes that each of us individually, and corporately can become the best we can be. We get to pursue happiness. Right out of the Declaration of Independence. Imagine that.

Obama, for his supposed “niceness,” his being the “lightworker,” his “hope and change” promise, his “elegance” (creased pants), failed in eight years to give the slightest bit of what Trump has done in two.

All those so-called great qualities of Obama’s, he really had none of them. He was a media creation. He wasn’t any of the illusory wonders that Leftists projected. He brought the country to a miserable place. He (and the Left) brought division. He demonized business (they didn’t build that). He accentuated racial strife. He politicized our government bureaucracies. He cultivated the environment of hatred that has become full-blown on the Left.

Our blemishes today are from Obama and the Leftist cabal. They will never stop roiling the waters, never stop this hatred, never stop the campaign to destroy Trump and his voters. That’s something you can count on.

Trump gets lambasted by the media every minute of every day. They simply want to annihilate him without reservation. And for what? Beating Hillary? The economic statistics mysteriously getting so strong so fast? Bringing more jobs, wealth, and a better paycheck for most of us? Making America safer by destroying ISIS? Having no missiles fired in the Pacific Rim from North Korea? Having structured better trade deals with our trading partners?

It’s a mystery. But only if you’re on the center-Right. Because, unlike Leftists, you don’t “know” he’s Hitler.

Judging what we’ve seen concerning the battle to build the wall, this is another winning issue for us all. The Left will lose. The American people overwhelmingly want something done, and the Democratic Party can’t win by ignoring this fact much longer. This issue has dominated the last weeks of Trump’s first two years.

This fight will likely be the beginning of a winning streak for his next two years. And, like so many things he has accomplished, it will be a great thing for this country. The very real border crisis will be corrected.

Which is the central point. We, fortunately, have a man from the League of Extraordinary Gentlemen as president, one who has already accomplished great things for America—great because we can again be optimistic, we can again strive for excellence, and we can revel in these days.