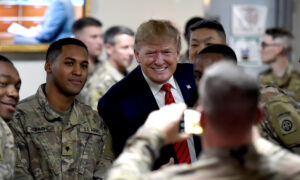 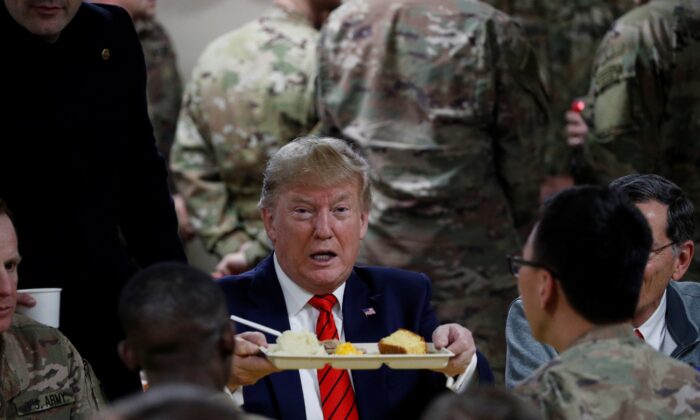 President Donald Trump eats dinner with U.S. troops at a Thanksgiving dinner event during a surprise visit at Bagram Air Base in Afghanistan on Nov. 28, 2019. (Tom Brenner/Reuters)
Trump Administration

Trump shared a meal with sons Donald Jr. and Eric and First Lady Melania Trump at his Mar-a-Lago resort in Florida on Friday night.

“It was great to see him for a belated family dinner, because while we all missed him at Thanksgiving, he was doing something more important… having dinner with our incredible troops in Afghanistan. Always thankful for family and time spent together.”

Trump’s daughter Ivanka Trump and her husband Jared Kushner appeared to be elsewhere.

Ivanka Trump shared pictures on social media of her three children celebrating Thanksgiving. It wasn’t clear where the photographs were taken. The family was reportedly spending the holiday with Kushner’s relatives.

President Trump surprised troops in Afghanistan on Thanksgiving, arriving in time to serve them turkey. He briefly sat at a table with his own meal but didn’t get to enjoy it for long.

“I sat down. I had a gorgeous piece of turkey. And I was all set to go, and I had some of the mashed potatoes and I had a bite of mashed potatoes. And I never got to the turkey, because General Milley said, ‘Come on over, sir. Let’s take some pictures.’ I never got to my turkey. It’s the first time in Thanksgiving that I’ve never had anything called turkey,” he told troops later.

“But that’s okay. But it looked awfully good, I have to tell you that. I should have started with that, instead of the mashed potatoes. I made a mistake. But I hope everyone enjoyed the fantastic meal. It certainly did look good. And hopefully everyone can get some well-deserved rest this holiday. Your family—they’re home, and they love you so much.”

He also told them: “There’s nowhere I’d rather celebrate this Thanksgiving than right here with the toughest, strongest, best, and bravest warriors on the face of the Earth.”

The trip was shrouded in secrecy and wasn’t reported on until after Trump landed in the country.

Trump flew from Afghanistan to Florida, stopping in Germany to refuel, and touched down at Palm Beach International Airport at 6:53 a.m.

On Saturday, Trump was golfing at his Trump International Golf Course.