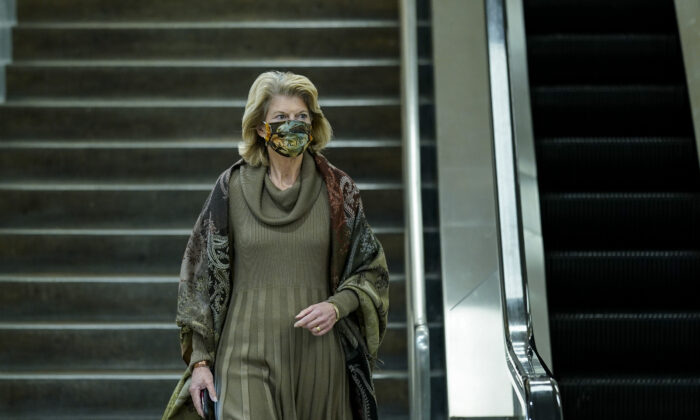 Sen. Lisa Murkowski (R-Alaska) walks through the Senate subway during a break in the second day of former President Donald Trump's second impeachment trial at the U.S. Capitol in Washington on Feb. 10, 2021. (Drew Angerer/Getty Images)
By Masooma Haq

“Lisa Murkowski is bad for Alaska. Her vote to confirm Biden’s Interior Secretary was a vote to kill long sought for, and approved ANWR, and Alaska jobs,” Trump said in a statement.

President Joe Biden’s Secretary of Interior Deb Haaland, on June 1 suspended all activities related to the running of the Coastal Plain Oil and Gas Leasing Program in the Arctic National Wildlife Refuge (ANWR), citing “completion of a comprehensive analysis under the National Environmental Policy Act.”

“I oppose this assault on Alaska’s economy and will use every means necessary to undo this egregious federal overreach. Alaska does responsible oil and gas development in the Arctic under stricter environmental standards than anywhere else in the world.”

Murkowski also criticized the administration’s decision on the ANWR. “The Biden administration’s actions are not unexpected but are outrageous nonetheless,” said Murkowski. The Alaska incumbent was also the only Republican senator to vote in favor of Haaland’s nomination.

“I have decided to support this nomination today to support the first Native American who will hold this position, and with the expectation that Rep. Haaland will be true to her word. Not just on matters relating to Native peoples, but also responsible resource development and every other issue,” said Murkowski.

“Murkowski has got to go! Kelly Tshibaka is the candidate who can beat Murkowski—and she will. Kelly is a fighter who stands for Alaska values and America First.  She is MAGA all the way, pro-energy, strong on the Border, tough on Crime, and totally supports our Military and our great Vets,” said Trump.

Trump also vowed to campaign against Murkowski after she voted to impeach him for the Jan. 6 breach. Out of the other six in the senate that joined Murkowski to impeach, two are retiring and she is the only one facing a reelection campaign in 2022.

She has not formally announced if she will run for reelection.

Murkowski has been representing Alaska in the U.S. Senate since 2002 when she finished her father’s term. She ran for and won her first full Senate term in 2004.

Meanwhile, Tshibaka is not a career politician and said she is the first person in her family to get a college degree. In a campaign statement, she said she is pro-life, pro-Second Amendment, and will hold the Washington establishment accountable.