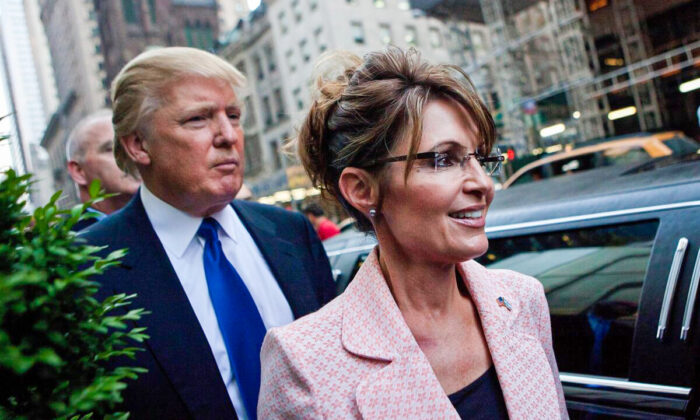 Former President Donald Trump has endorsed former Alaska Gov. Sarah Palin after she announced a bid for the congressional seat left vacant by a sudden death.

“Wonderful patriot Sarah Palin of Alaska just announced that she is running for Congress, and that means there will be a true America First fighter on the ballot to replace the late and legendary Congressman Don Young,” Trump said in a statement.

Young, a Republican who held Alaska’s only seat in the House of Representatives for decades, died at age 88 on March 18.

Trump noted that Palin endorsed him while he ran for president in 2016 before continuing his praise of the former Republican vice presidential nominee.

“Sarah has been a champion for Alaska values, Alaska energy, Alaska jobs, and the great people of Alaska. She was one of the most popular Governors because she stood up to corruption in both State Government and the Fake News Media,” he said, adding that Palin “is tough and smart and will never back down, and I am proud to give her my Complete and Total Endorsement, and encourage all Republicans to unite behind this wonderful person and her campaign to put America First!”

Palin acknowledged the endorsement on social media, saying she was honored to receive the boost.

Young’s death means a special election will be held to fill the seat.

The all-party primary will take place on June 11, with the top four vote-getters advancing to the Aug. 16 special general election.

More than 50 people have declared their candidacy, including Republican state Sens. John Coghill and Josh Revak, Democratic state Assemblyman Christopher Constant, and Al Gross, the Democratic nominee for the seat in 2020.

“That’s nice for Sarah,” Nick Begich, one of the candidates, told The Epoch Times in an email about Trump’s endorsement. “Our campaign is excited about all the endorsements we’ve been receiving from respected Alaskans from across the state who are going to be the ones actually voting in and deciding this election. I think most Alaskans remember her as someone who quit on Alaska while she was Governor. Why should we trust her to not quit on Alaska now? This isn’t reality tv, this is real life.”

Gross added: “This race is about Alaska. My opponent is getting a lot of support from outside, while I’m taking my message right to Alaskans. I am focused on earning the support of Alaskans in this race.”

Palin, who hasn’t held an elected office since 2009, was one of the last entries.

She said she wanted to honor Young’s legacy “by offering myself up in the name of service to the state he loved and fought for, because I share that passion for Alaska and the United States of America.”

Whoever wins the special election will only serve until January 2023 unless they win the regular election in November.

Members of the House of Representatives face reelection every two years.

Both elections will utilize ranked-choice voting, which Alaska voters approved in the 2020 election.

The races end if one candidate receives a majority of the top ranking on ballots. But if no one does, the candidate who receives the fewest votes is eliminated, and the second choice of each voter who picked that candidate is counted toward the remaining candidates.

The process continues until a candidate has received a majority.