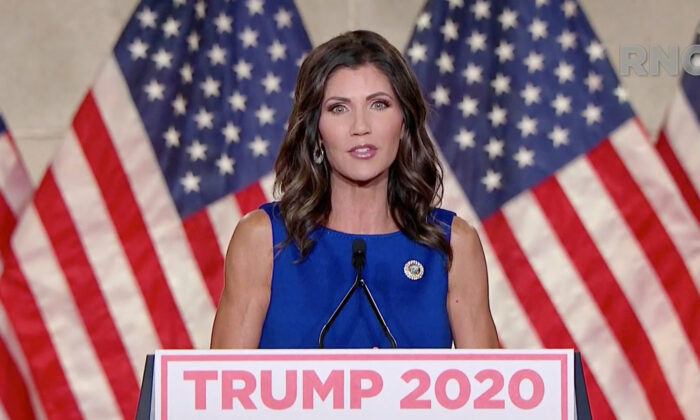 In a statement, Trump spoke highly of Noem’s character, policies, and performance.

“Kristi Noem has done a great job as Governor of South Dakota,” Trump said. “She is strong on Borders, the Second Amendment, preserving land and Energy Dominance, Medical Freedom, and kept South Dakota open during COVID.”

He added, “She fully supports our great Law Enforcement, Military, our wonderful Vets—and is a fighter for the incredible people of South Dakota. Kristi has my Complete and Total Endorsement!”

Noem, who has served as South Dakota governor since Jan. 8, 2019, is up for reelection this year.

The Republican governor took to Twitter shortly later to thank Trump for his endorsement.

“Thank you, Mr. President. I appreciate your friendship and support over the years. We’d love to have you back on July 4th for fireworks!” Noem wrote.

She said she was “honored and humbled” to receive an official endorsement from the former president, according to the Argus Leader.

“Since being elected Governor, I have worked to bring President Trump’s America First agenda to the state level in South Dakota by cutting burdensome regulations, keeping government out of the way of South Dakota small business owners and job creators, and supporting South Dakota law enforcement,” Noem said.

“I look forward to continuing to fight for our shared agenda if elected to serve a second term as Governor of the great state of South Dakota.”

Noem is set to challenge Republican state Rep. Steve Haugaard in the midterms. Haugaard, a Sioux Falls lawyer, said in November last year that he believes Noem is bound to corporate interests and has repeatedly sided against conservatives.

“Kristi Noem has been beholden to special interests, from the NCAA, to big business, to corporate lobbyists,” Haugaard said of Noem during his formal campaign announcement at the time.

Responding to Trump’s endorsement of Noem, Haugaard said that Trump “has seen Governor Noem much more over the last two years than the citizens of South Dakota,” according to the Argus Leader.

“She’s been very busy campaigning outside the state and laying the groundwork for her national ambitions, while I continue to be focused on the people of South Dakota and the work that needs to be done here.”

Haugaard is known for being one of the House’s most ardent conservatives on both fiscal and social issues. He clashed with the governor on several occasions while he was House Speaker in 2019 and 2020.