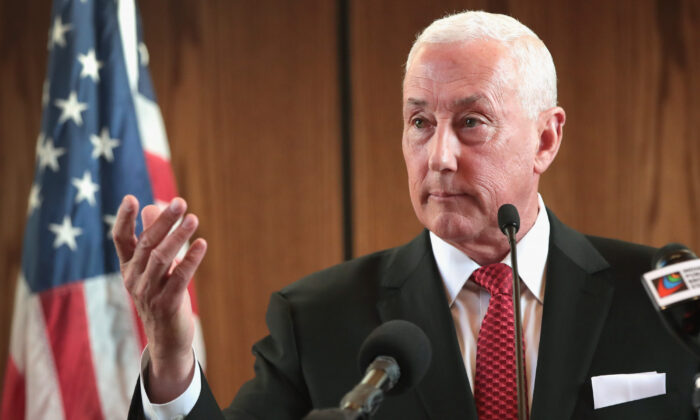 Greg Pence, Republican candidate for the U.S. House of Representatives, speaks to guests at a primary-night watch party in Columbus, Ind., on May 8, 2018. (Scott Olson/Getty Images)
2022 Midterm Elections

“Congressman Greg Pence is doing a great job representing the people of Indiana’s 6th Congressional District,” Trump wrote in a statement on Friday that was shared on Twitter by his spokeswoman, Liz Harrington.

“A former First Lieutenant in the U.S. Marine Corps, Greg continues to proudly serve our Country in the U.S. House of Representatives. Greg is working hard to reverse Joe Biden’s disastrous record of out-of-control Inflation and restore the respect our Country deserves from abroad,” the former president went on to say.

“He is Strong on the Border, Protects Life, Defends the Second Amendment, and Supports our brave Military and Vets. Greg Pence has my Complete and Total Endorsement!” he said.

Pence, a 65-year-old businessman, has held Indiana’s 6th Congressional District seat since he was first elected to the House of Representatives in 2018.

“My priorities will always be creating jobs, growing the economy, protecting our borders, and providing for our fighting men and women—both during and after their service,” he is quoted as saying on his campaign website.

The Columbus resident has been a strong supporter of the Trump-Pence agenda and served on the committees for transportation and infrastructure, as well as the committee on foreign affairs from 2019 to 2020.

Before he started serving in U.S. Congress, he joined the U.S. Marine Corps in 1979 in his hometown of Columbus until 1984. He then became the president of the Kiel Brothers Oil Company from 1998 until 2004.

“I will always put Hoosiers of the 6th District and Indiana first,” he said. “I am honored to represent the place I live and the only place I will ever call home.”

Trump has made a flurry of endorsements ahead of the 2022 midterm elections, including Joe Lombardo (R-Nev.) and Rep. Ted Budd (R-N.C).