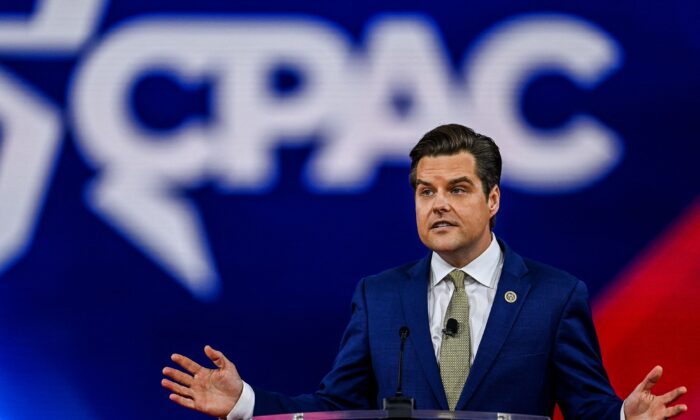 “@RepMattGaetz is a relentless Fighter for the incredible people of Florida’s 1st Congressional District!” Trump wrote on his Truth Social platform.

“Matt is a Champion of our MAGA Agenda, who tirelessly works to Drain the Swamp, Secure the Border, Support our Brave Veterans and Law Enforcement, Defend the Second Amendment, Stand Up to the Woke Mob, and Fight the Never-Ending Witch Hunts from the Radical Left that are destroying our Country!” Trump added.

The former president ended his post by saying, “Matt Gaetz puts America First, and he has my Complete and Total Endorsement!”

Florida voters will head to the polls on Aug. 23 to choose their Democratic and Republican candidates for the November general elections. Incumbent Gaetz will face two GOP challengers—Mark Lombardo, a Marine veteran and former FedEx executive, and Greg Merk, a retired military officer and pilot.

Merk lost to Gaetz in Florida’s 2020 GOP primary, finishing a distant third with 9.5 percent of the vote to Gaetz’s 80.9 percent.

In early August, Gaetz told NTD’s “Capitol Report” program that he foresaw the Republicans taking back the House in November.

“We’re going to win. But I don’t want to win by default or dissolution. I want to win with a mandate to actually win battles for our people again,” Gaetz said. “So many Americans right now feel beat down and beleaguered by the spending with our government that’s caused inflation, the vaccine mandates, tyrannical lockdowns, a border that we’ve just allowed to convert into a turnstile.”

“So it’s my hope that when we win, we will convert every committee in the Congress to an oversight committee,” Gaetz continued. “And we will expose how these bad decisions from the Biden administration have directly led to the challenges that people are having to overcome in their lives.”

With a majority in the House, Republicans aim to establish a select committee to investigate the Biden family’s business dealing, Gaetz previously said, in order to “look into very legitimate concerns about influence peddling and compromise and leverage that may exist today over the Biden family.”

The ongoing migrant crisis has not shown any sign of easing. Customs and Border Protection (CBP) reported there were 199,976 migrant encounters at the U.S.–Mexico border in July, bringing a total of over 1.9 million migrants encountered since October 2021.

“Voters know this is Biden’s border crisis and they will make Democrats face the consequences in November,” McDaniel said.

“It’s a total national security threat,” Gaetz told NTD about the border crisis. “Hopefully, we will be able to demand a secure border as part of the Republican control of the House.”

Meanwhile, Rutherford and Franklin are still seeking GOP nominations. Trump praised the two lawmakers for fighting to secure the U.S. border and defend the Second Amendment.

Trump also praised Franklin for holding “Joe Biden and the Radical Left accountable for their colossal incompetence” in his endorsement.

The 900,000 barrels mentioned by the lawmakers turned out to be a portion of all recent SPR oil sold to China. According to DoE documents reviewed by The Epoch Times, the DoE sold nearly 6 million barrels of oil from the SPR from September 2021 to July to Unipec America.

Last month, Rutherford was one of the co-sponsors in introducing the Migrant Protection Protocols Act (H.R.8382), which aims to codify the Trump administration’s “Remain in Mexico” policy.

The policy, officially known as the Migrant Protection Protocols, required keeping migrants seeking asylum to wait in Mexico until their U.S. court hearings. Now, migrants no longer have to wait after a U.S. district court judge lifted an injunction preventing the Biden administration from ending the policy in early August.

“As a member of the House Appropriations Homeland Security Subcommittee, I am focused on protecting our national security and promoting fair and effective immigration policies,” Rutherford said in a statement to accompany the new bill.

He added, “The Migrant Protection Protocols Act will reaffirm our commitment to national security and public safety by giving us time to vet migrants before allowing them into our country.”