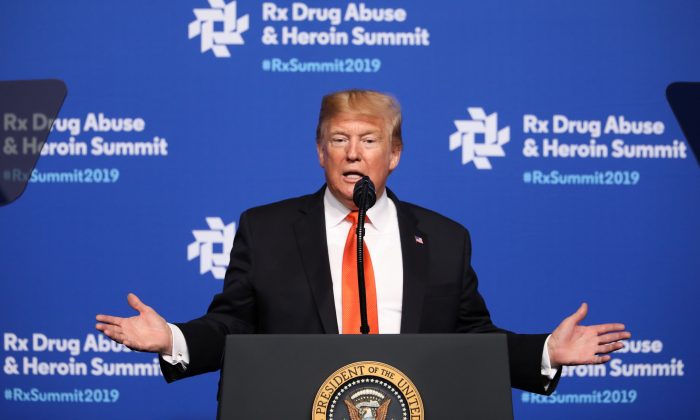 President Donald Trump highlighted faith-based initiatives as a major part in the administration’s efforts to resolve the epidemic of opioid abuse in the country, which Trump declared a national emergency in 2017.

“My administration is committed to ensuring that every citizen can live with dignity and purpose and proudly pursue the American dream,” Trump said at the Rx Drug Abuse and Heroin Summit in Atlanta on April 24. “Critical to this effort is my administration’s strong support for faith-based initiatives.

“America is a nation that believes in the power of prayer and the strength of fellowship. We believe in the grace of God and we’re proud of it.”

Trump introduced on stage Monty Berks, director of faith-based initiatives at the Tennessee Department of Mental Health, who himself recovered from addiction after getting help from his hometown church 19 years ago.

He said the department’s leaders gave him a chance because they knew he “had a purpose.”

Addicts in recovery have proven effective in helping other addicts to quit and stay clean. Groups such as Narcotics Anonymous (NA), many of which encourage spirituality in recovery while not necessarily being religious, have utilized this resource for decades. Research indicates that approach works just as well as professional psychological interventions, if not better.

The Opioid Crisis Response Act of 2018, which authorizes some $5 billion over five years to fight the addiction crisis, includes $25 million in grants for “building communities of recovery,” which includes peer-support networks such as NA.

Trump also emphasized prevention, saying “one of the most important steps to ending the opioid crisis is to prevent young people from ever using drugs in the first place.”

In January, the administration released its “National Drug Control Strategy” which focuses on education and prevention, providing treatment, and stemming the supply of illegal drugs (pdf).

“Reducing the size of the illicit drug-using population through prevention and treatment, together with reducing the availability of drugs in the United States through law enforcement and cooperation with international partners … will set the Nation on the path to being strong, healthy, and drug-free,” the document reads.

The overdose death rate has skyrocketed in recent decades, tripling since 2000, and is largely prompted by the proliferation of prescription opioids, cheap heroin smuggled from Mexico, and ultra-potent—and deadly—fentanyl from China. More than 70,000 people died of drug overdoses in 2017, according to the CDC.

The numbers, however, began to taper off in 2018, provisional data shows. In the 12 months ending September 2018, overdose deaths declined by 3.2 percent compared to the preceding 12 months, the data shows.

“These are signs that dedicated efforts from the federal government on down to local governments, faith communities, families, and individuals are working,” the department stated.

“As ONE UNITED NATION, we will work, we will pray, and we will fight for the day when every family across our land can live in a DRUG FREE AMERICA!” Trump wrote on Twitter.

As ONE UNITED NATION, we will work, we will pray, and we will fight for the day when every family across our land can live in a DRUG FREE AMERICA! #RxSummit2019 https://t.co/FqpHhaafkD